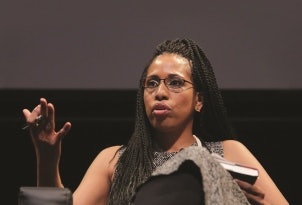 The course of Dr. Sherie M. Randolph’s career completely changed when she discovered Flo Kennedy, whose life she chronicles in a book two decades in the making.

Discovering Florynce “Flo” Kennedy while randomly channel surfing 20 years ago changed the life of Randolph, today an associate professor of history and African-American studies at the University of Michigan. Then a graduate student studying 19th century history, Randolph’s career changed course to a 20th century focus. In the TV clip, Kennedy was yelling at Daniel Patrick Moynihan.

“She was also talking about racism and sexism. It was clear that footage was old, but she seemed so present and cutting edge.

She seemed so ahead of her time,” says Randolph. Kennedy was largely a footnote in other people’s stories until Randolph compiled the research and wrote a compelling biography, Florynce “Flo” Kennedy: The Life of a Black Feminist Radical, published last fall.

In some ways, it is also Randolph’s story of being an innovator and visionary since telling Kennedy’s story was a challenge.

Kennedy (1916-2000), whose life and work deeply impacted both the Black Power and feminist movements, was far ahead of her time. Media savvy, she was known for using street theater and shock tactics to generate attention for important issues. Often dismissed by predominantly White feminist leaders in the ’60s and ’70s, Kennedy pointed out intersections of race, class and gender and engaged in activism and advocacy for multiple causes.

While her name appears in feminist and Black history, few stories have been written about her.

Even Kennedy’s own autobiography, Color Me Flo: My Hard Life and Good Times, was not a traditional memoir, but a collection of her speeches and interviews along with some photos and event fliers.

While a doctoral student at New York University, Randolph managed to have a brief phone conversation with Kennedy toward the end of Kennedy’s life. Shortly after, Randolph wrote a civil rights paper about Kennedy, and professors encouraged her to dig deeper.

“The more I found out about her, it made me happy,” Randolph recalls. “I don’t think academics normally think of their work as giving them pleasure. Studying her was very pleasurable. … She totally educated me start to finish.”

Collecting information became a hobby of Randolph’s and then a passion. She went through two unorganized boxes of Kennedy’s papers at Harvard and then started tracking down other information. She spent a year sitting on the floor at the home of one of Kennedy’s sisters sorting through 17 boxes of disorganized materials.

In the book, Randolph writes that Kennedy’s feminism emerged out of answering the questions of Black Power and self-determination.

“I’m also an organizer, so I find myself saying her quotes, especially when meetings are tense,” Randolph says.

Before joining the faculty at Michigan, she was associate director of the Women’s Research & Resource Center at Spelman College. Randolph most recently received a fellowship from Emory University’s James Weldon Johnson Institute and the Schomburg Center for Research in Black Culture.

Today, when Randolph delivers talks, she speaks about how Kennedy built broad political alliances and how that translates to the present day.

Documents, also gathered from Kennedy’s friends, family and acquaintances, are now organized and archived at Harvard’s Schlesinger Library so that future generations of scholars can study them.

“I’m hoping that Flo’s ideas will spark further analysis from other people and there will be other biographies,” says Randolph, who is currently at work on a book about African-American women political exiles in Cuba, titled “Free Them All.”

“I’m hoping that she’ll be inserted in books and discussions about intersectionality and the various genealogies and strands of Black Power that included Black women’s leadership. They won’t be able to ignore her,” Randolph says.