The recent exoneration of the Anaheim and Bakersfield, California police officers, respectively, who killed Adalid Flores, who was carrying a cell phone, and 73-year-old Francisco Serna, who was carrying a crucifix, drives home the mantra of “no convictions” that has been made by criminal justice activists. In three recent high-profile trials involving the officers who killed Philando Castile, Terrence Crutcher and Sylville Smith, all officers have walked. 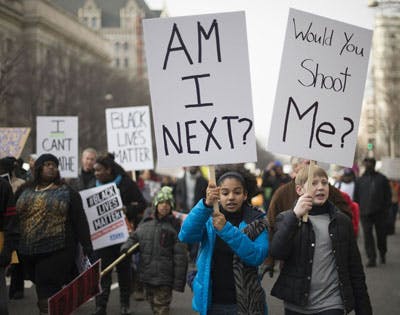 It reminds us that police abuse remains pandemic in this country with no signs of abating and with no signs anywhere of accountability. This, in an era of video recordings of killings that go viral with little, if no effect, in the courtroom.

The Washington Post recently reported that at the rate of police killings (492 deaths) for the first six months of this year, police will have killed close to 1,000 civilians for the third year in a row by the end of 2017. Despite the staggering numbers, that is probably an undercount, based on the following information.

While these numbers of deaths have become “normalized,” this new nationwide mantra is also the historic, and I suspect, unless there is a radical intervention, it will be the future mantra.

Truthfully, most officers who kill civilians never get prosecuted by compliant district attorneys, and if they are and do get convicted, there is a virtual guarantee that an officer will never do serious prison time, if at all.

Similarly, they also rarely lose civil cases, but if they do, the money never comes from their own or their department’s pockets, instead, from insurance companies. The worst that happens, in especially egregious cases, is that they will get fired, and then get rehired in another jurisdiction.

No prosecutions. No convictions. No prison time. This is the classic definition of impunity.

Also to be kept in mind is that this comes amid a massive undercount [and “invisibilization”] of perhaps at least 33% of the killings of brown peoples in this country.

Truly, these statistics barely scratch the scope of this historic problem, which the media tends to reduce to a numbers game. This tends to ignore the overall and larger use of excessive force, which includes unjustified killings as a punitive method of social control, particularly against communities of color. The U.S. penal system also functions similarly, and is the world’s largest, with more than 2 million prisoners at any given time, resembling warehouses for red, black and brown peoples, including the poor of all colors.

Prior to this modern scourge, mob justice and lynchings functioned similarly against these same communities. Truly, my life-long research on this topic informs me that this is the way it has always been since 1492 for these communities of this continent. The sordid history of genocide, land theft, slavery, lynchings, segregation and dejure and defacto discrimination — including this rampant law enforcement abuse — proves this observation correct.

From this topic, two questions arise:

The first answer: dehumanization and impunity. Peoples considered less than human will always be treated as such in the eyes of the law. Conversely, the U.S. judicial system has shown throughout its existence that there is no effective check on law enforcement. Outside of a few high-profile cases, impunity is thus permanently institutionalized.

Given this history, indeed a radical intervention is in order. The international criminal courts at both the Organization of American States and the United Nations were specifically created to deal with non-functioning judicial systems. And yes, that unquestionably characterizes the relationship between the United States and people of color. If impunity thrives in the United States, and the OAS and the UN have bodies designed to deal with such impunity, then the next logical step has to involve the preparation of a rock-solid case to take before these bodies, not to prove discrimination, but to attain criminal prosecutions.

Even if we limit such a case to nationwide killings since Michael Brown in Ferguson, Missouri, in the summer of 2014, several hundred examples can be consolidated to show that when it comes to the lives of people of color, there is absolutely no justice in this country.

There is no naiveté involved here. The United States, especially under this administration, would never accept a verdict from either body, yet it is critical to expose the world to the reality that people of color continue to live inside the “world’s most advanced democracy.”

Rodriguez, an associate professor in Mexican American Studies at the University of Arizona, won two police brutality trials against Los Angeles County Sheriff’s officers in 1979 and 1986. He has a forthcoming book on police abuse and brutality against the red, black and brown communities of this country.