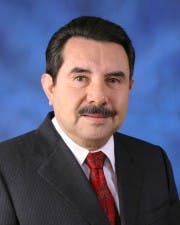 Antonio Flores is president of the Hispanic Association of Colleges and Universities.

With the clock ticking on the nation’s “fiscal cliff” crisis, education advocates are expressing mounting concern about how an automatic, across-the-board budget cut would decimate student financial aid and other higher education programs beginning January 1.

“It would have very far-reaching negative impacts not just on minority-serving institutions but on the rest of the higher education community,” Antonio Flores, president of the Hispanic Association of Colleges and Universities, told Diverse this week.

With automatic cuts of 8.2 percent set to affect most federal programs, the sequester amounts to “shooting ourselves in the foot,” he said. “It would just devastate our already weak economy and put us on a wrong track.”

The “fiscal cliff” includes a series of expiring tax breaks and required spending cuts that would begin in 2013 because of the continued inability of Congress and the White House to reach agreement on plans to reduce the federal budget deficit. Also known as a “sequester,” the cuts would amount to $1.2 trillion over 10 years, equally divided between defense and domestic discretionary spending, which includes education.

All federal education programs—with the exception of Pell Grants—would face cuts in 2013, though Pell only has a one-year exemption and would face reductions should across-the-board reductions continue past next year.

n  Title I: This major K-12 program for low-income students would lose $1.1 billion, which could affect 1.8 million students and eliminate more than 15,000 education jobs.

“It would be the largest funding cut ever,” he said, with education reductions totaling $4.1 billion. The reductions affecting HBCUs, Head Start and hundreds of other programs represent “deep, mindless, harmful cuts,” Packer told Diverse.

While Pell Grants would be protected next year, the maximum grant could drop by $300 or $400 once the one-year exemption runs its course, said Mark Kantrowitz, publisher of finaid.org, a key resource on financial aid for college.

“What we should be doing is to double or triple the maximum Pell Grant,” Kantrowitz told Diverse. “The current choice is cutting or not cutting education. The real choice should be to increase funding in a bold way. It could be the start of a new American renaissance.”

In addition to the spending cuts, lower- and middle-income families would see education tax credits also go down if the full fiscal cliff takes effect. Among the provisions set to expire Dec. 31 are the American Opportunity Tax Credits, which gives middle-income families a credit up to $10,000–$2,500 a year for four years—to offset college tuition. The credit also is partially refundable to low-income households.

If allowed to expire, he said, the tax code would revert to prior law, which provided a maximum credit of only $3,800 for just two years and aimed at middle-class households.

Borrowers also could no longer deduct student loan interest over the life of their loans, Kantrowitz said. If this provision is allowed to expire, taxpayers would go back to the old system in which interest was only deductible for five years.

While criticizing the cuts, education groups also are taking action to build public support against a sequester. CEF, which represents dozens of education organizations, has a campaign, Education Cuts Never Heal, with statistics and fact sheets for advocates to use in contacting policymakers.

CEF also co-commissioned a poll showing education cuts are unpopular with most Americans. In the poll, 55 percent said education programs should be protected from cuts. Also, when given a choice between cutting defense and education, 57 percent favored reductions in defense.

Education groups also are joining with health care, veterans and other organizations whose programs fall under Congress’ definition of “domestic discretionary programs.” Packer said this category often becomes a budget target because the phrase is little understood among some leaders and the general public.

“People don’t recognize what it is,” Packer said. Yet it’s an area where cuts can “hurt the most vulnerable people the most.”

Some analysts say it’s possible Congress and the White House will not solve fiscal cliff issues by Dec. 31, meaning cuts could take effect at least temporarily. That would be bad news for schools and colleges, Packer said, even if it takes several months for reductions to ripple through the economy.

“Schools, colleges and states won’t wait until the end to cut their budgets,” he said. “They have to plan for the worst-case scenario.”