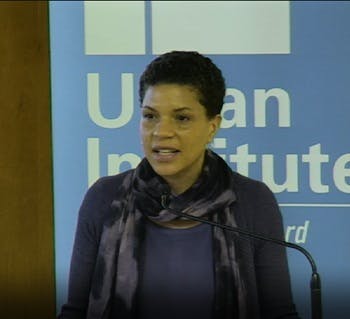 In 1965, a growing tide of Black male joblessness spurred the prediction by then Assistant U.S. Labor Secretary Daniel Patrick Moynihan that the Black family would experience considerable disruption in the coming years. Moynihan’s famous analysis, “The Negro Family: The Case for National Action,” had stated that the Black family, “battered and harassed by discrimination,” was “the fundamental source of the weakness of the Negro community.”

For law professor and author Michelle Alexander, the mass incarceration of Black men stemming from the prosecution of the “War on Drugs” has created social conditions among African-Americans far more devastating than what Moynihan predicted 48 years ago. “It’s been said that things have worsened since the Moynihan Report was released, and I would say that is a considerable understatement,” she said Friday at the Urban Institute think tank and Fathers Incorporated organization policy forum, “Black Families Five Decades after the Moynihan Report.”

“A revolution has occurred since Moynihan issued the so-called infamous report. A new caste system has emerged in poor communities of color—a caste system that has resulted in not only millions being locked up and permanently locked out, but a caste system that has managed to destroy [and] decimate Black families in the United States,” Alexander told forum attendees in a riveting keynote speech.

Alexander, author of the widely-praised The New Jim Crow: Mass Incarceration in the Age of Colorblindness and an Ohio State University law professor, said the nation passed up the opportunity to help create better social conditions for Blacks and others. Instead of pursuing policies that might have made it possible to stem the tide of joblessness that has disproportionately curtailed opportunities for Black men over the past half century, the U.S. pursued criminal justice policies that has seen the nation’s prison population swell from 300,000 to well over 2 million, she noted.

Noting that studies have shown that Blacks consume illicit drugs at a rate roughly comparable to other racial and ethnic groups, Alexander pointed to the disproportionately high prosecution of Black males for non-violent drug offenses as a significant factor in the high rate of Black male incarceration.

“In the years since the Moynihan Report, we’ve made a profound choice. Rather than good schools, we have built high-tech prisons. Rather than create good jobs and invest in the communities that need it most, we have embarked upon an unprecedented race to incarcerate that has left millions of Americans locked up and locked out,” she said.

Forum speakers and commentators featured in a short film about the Moynihan Report noted that, despite the controversy surrounding the report’s release, the analysis was fundamentally a plea to the nation to ensure economic opportunity for Black families. “The Moynihan Report was a call to action with the principal focus on jobs, which got lost I must say,” Columbia University economist Irwin Garfinkel said in the Moynihan legacy video that was presented during the policy forum.

“Remember who Moynihan was. He was working for the Department of Labor… And the Labor Department has always and was then a principal advocate for jobs,” Garfinkel said. Moynihan later became a U.S. senator representing the state of New York.

Other forum speakers noted that the current statistical portrait of Black families bears out what the Moynihan Report predicted. “The very numbers for Black families that so alarmed Moynihan in the 1960s have grown worse over time, and not just for Blacks. In fact, on many of the measures that Moynihan had looked at, White families are looking like what Black families looked like about 50 years ago,” said

Dr. Gregory Acs, director of the Income and Benefits Policy Center at the Urban Institute.

Among the policy forum participants were Kenneth Braswell, executive director of Fathers Incorporated; Helen Mitchell, director of strategic planning and policy development in the Office of U.S. Representative Danny Davis; filmmaker Janks Morton, producer of “What Black Men Think”; Dr. Jeffrey Shears, director of the Social Work Research Consortium in the Department of Social Work at the University of North Carolina—Charlotte; and Dr. Margaret Simms, director of the Low-Income Working Families project at the Urban Institute.