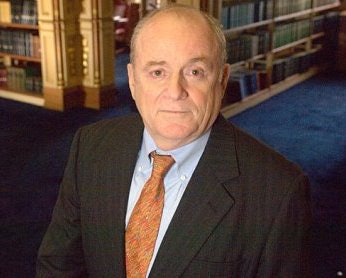 Anthony Carnevale, director of the Georgetown University Center on Education, says the higher education “system needs to be more efficient” in graduating students to keep pace with workforce needs.

Due to new jobs and continuing retirements among Baby Boomers, 55 million new job openings will be created between now and 2020, but the economy will fall short 5 million workers with the postsecondary degrees those jobs require.

So says a new study released Wednesday by the Georgetown University Center on Education and the Workforce.

“That 5 million person shortage will get filled. People will get hired,” said center director Anthony Carnevale. “Employers will find ways to substitute the people they can get for the people they need, maybe use a little technology and so on.

“But in the end, our bias is the system needs to be more efficient,” Carnevale said of higher education and the speed at which it graduates students.

Others cast doubts on the projections in the study, titled Recovery: Job Growth and Education Requirements through 2020.

Among the skeptics is Joshua Hall, associate director of the Center for College Affordability & Productivity, which recently found that about 48 percent of employed U.S. college graduates are in jobs that require less than a four-year college education.

Hall said as an economist, he is “very skeptical” of anything that projects a shortfall in something “without very clear reasons why there is a shortfall since, other things equal, people will adjust to meet demand.”

“For example, if more people start eating more kale, do we need to worry that there are not acres devoted to kale?” Hall asked. “No, because farmers have an incentive to change what they plant to meet this change in customer demands.”

Carnevale acknowledged that people eventually find out by word of mouth which jobs require what kind of education and respond accordingly.

“But well-informed word of mouth is better than word of mouth,” Carnevale said, lending his support to the Student Right to Know Before You Go Act, which would create databases that enable people to see how much they are likely to earn if they obtain a certain type of postsecondary degree.

“I think it’s really just primitive that we don’t have this information,” Carnevale said of the act, which he referred to as the “legislative piece” of helping higher education become more efficient.

The new Georgetown study found that, of the 55 million expected job vacancies between now and 2020, 24 million will be for new jobs and 31 million will be due to retirements among Baby Boomers.

The report says 65 percent of job vacancies in the coming decade will require “some postsecondary education and training.”

Within those jobs, the report says:

The report also shows which occupations are growing or declining within each state and what level of education people need to obtain those jobs.

Whereas in a previous Georgetown report, only 19 states were above the national level of 65 percent of jobs that require postsecondary education, in this year’s report, 32 states and the District of Columbia are expected to be at or above that level.

Specifically, the report found that:

The report also deals with positive growth in manufacturing for the first time in decades, which Carnevale said is largely due to lower energy prices and the benefits of the infrastructure located on American soil.

“When you do calculations and add energy and transportation costs and costs in available infrastructure and so on, in many cases, the U.S. looks like the place to do business,” Carnevale said.