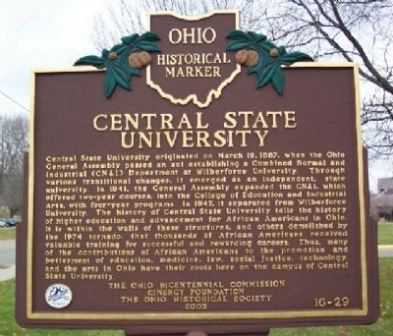 President Obama has signed into law a wide-ranging farm bill with several key changes for minority-serving institutions, including a provision that gives long-awaited land-grant status to Central State University in Ohio.

A historically Black college, Central State has sought land-grant status since 1890 when the federal government designated its first set of HBCUs as land-grant colleges. “This designation is nearly 125 years in the making and long overdue,” said Sen. Sherrod Brown, D-Ohio.

By gaining land-grant status, the university will qualify for additional federal grants, as well as awards related to agricultural research and development. To date, Ohio State University has been Ohio’s only state public land-grant institution.

“The steps we take to utilize this land-grant status will help CSU strengthen academic programs and continue to develop graduates with the knowledge, skills and disposition to become engaged citizens in the state of Ohio,” said Central State President Cynthia Jackson-Hammond.

Though representing only a few lines in a congressional report spanning nearly 600 pages, the language contained in the bill will generate many changes at the university.

Jackson-Hammond cited several immediate priorities, such as developing a Minority, Women and Small Farmers Education Center at the university. She also said the status would help strengthen STEM and other academic programs while helping prepare more students for government careers in environmental and agricultural fields.

The university also expects to expand its research on health disparities among African-American communities in Ohio and increase its business incubator activities to promote entrepreneurship and workforce development, added Jackson-Hammond.

Central State originally began as a department within Wilberforce University, an HBCU founded in 1856. Its initial focus was on vocational and teacher education. For many years, it operated as part of Wilberforce, but with a separate board of trustees.

With the new designation, Jackson-Hammond said land-grant status will allow the university to apply for federal agricultural research and construction funds that are reserved solely for land-grant colleges and universities.

Culminating a two-year debate, the $956-billion Agricultural Act of 2014 focuses primarily on extending food stamps, crop insurance and conservation programs. But aside from the Central State designation, the bill also contains language favorable to Hispanic-serving colleges and universities that have an agricultural focus.

The bill would authorize a new competitive grants program for Hispanic-serving institutions to work with Hispanic agricultural workers and youth.

Hispanic-serving colleges are “especially excited about a new program supporting opportunities for young migrant workers,” said Antonio Flores, president of the Hispanic Association of Colleges and Universities. Though created under the 2014 farm bill, the program would still need an appropriation from Congress before the government could begin to offer grants, he said.

Eighty colleges and universities were designated as Hispanic-serving Agricultural Colleges and Universities in 2013, according to the U.S. Department of Agriculture. These colleges must have full-time enrollment that is at least 25 percent Hispanic. In addition, the institution must offer accredited agriculture-related programs and Hispanic students must earn at least 15 percent of agriculture-related degrees during the previous two years.

The House of Representatives approved the farm bill by a 251-166 vote in late January. The Senate followed with a favorable vote of 68-32 on Feb. 4, sending it to the White House for the president’s signature.