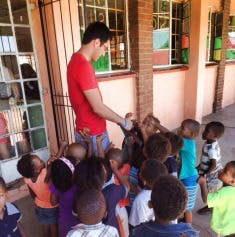 Program participant Clint Brayfield, a Native American student from Robertson High School in Las Vegas, New Mexico, and a member of the 2010 BA/MD Cohort, volunteered at an orphanage this year in Port Elizabeth, South Africa. (Photo courtesy of the University of New Mexico)

At the University of New Mexico (UNM), an innovative program takes students from rural and urban, largely Hispanic communities and guides them from 12th grade through graduation from medical school. ­The Combined BA/MD Program is part of UNM’s effort to increase the number of primary care physicians in those communities. It is also part of a nationwide movement to encourage health care professionals to work in underserved communities.

The U.S. Department of Health and Human Services reported in June that it would take approximately 8,200 additional primary care physicians to eliminate all of the currently designated “health professional shortage areas,” or HPSAs. ­There are approximately 6,100 Primary Care HPSAs in the country, based on a physician-to-population ratio of 1 to 3,500.

One of the leading organizations addressing the problem is the American Association of Medical Colleges. According to its August 2014 report on the physician workforce, “Estimates suggest that the U.S. is facing an overall shortage of 130,000 active care physicians and almost 66,000 primary care physicians by 2025. ­These shortages could exacerbate the health care access problems many Americans face today.”

To help alleviate the shortage, AAMC has created Urban Universities for HEALTH (Health Equity through Alignment, Leadership, and Transformation of the Health Workforce), or UU-Health, whose stated goal is “to enhance and expand a culturally sensitive, diverse and prepared health workforce” in order to improve the overall health of residents in these areas and to reduce health care disparities.

“UU-Health is a learning collaborative,” says Marc Nivet, chief diversity officer of AAMC. Five of the organization’s 141 member schools are involved in the project and are developing programs that fi t their particular institutions while meeting the overall goals of the UU-Health project.

“­They are attempting to find individuals who have high willingness and interest in going back to serve in underserved communities,” Nivet explains. “What we’re really trying to do in this collaborative is to figure out what works best.”

He describes the University of New Mexico’s BA/MD Program as “a really good example.”

Although the BA/MD Program was already in existence when UU-Health began, it is one of the five institutions included in the learning collaborative.

Dr. Richard S. Larson, executive vice chancellor at the UNM Health Sciences Center who oversees the project manager of UU-Health at UNM, says the program is showing success. “We identified people from underserved areas coming out of high school and put them in [the] program. The first cohort has just entered residency, so based on the statistics, we’re anticipating 70 to 80 percent, or a very significant portion of those students will go to underserved areas.”

It is also expected that most students will remain in the state, which has a critical need in both its urban and rural population areas.

“As the only school of medicine in New Mexico, we see one of our primary missions is to educate doctors who will stay in New Mexico,” Larson notes, adding that those who choose to leave are likely to practice in other underserved communities based on their backgrounds and stated interests.

Larson says students are selected using “a holistic approach.” Traditional standards were deemed inadequate based on the conditions. For example, traditional academic criteria could not be used because many of the students were attending high schools that did not offer the courses necessary for them to enter most pre-med programs.

“We teach those courses in college,” Larson says, adding that the process was developed “out of sheer desperation.”

Larson explains that “the retention rate is very high now, but we’re nine to 10 years into it. It was very rocky the first two years. When we first started the BA/MD Program, one of our challenges was we had a very high rate of at-risk students, and even with additional or remedial efforts it was very difficult to get them through the program, but we have learned over time to get much better at picking those students.”

He says that the current admission criteria include standards such as leadership and community service. “A lot of it rests on identifying those students who are very promising but who have just been in a disadvantaged situation. The key predictors that we’re looking at (are), What is the environment they’re in? … What indicates that they’re going to be able to overcome the disadvantages they have had?”

A summer preparatory program and a strong support system have made the program work, Larson says. Another factor is continued support from the state government and constancy of leadership at the university. “If we hadn’t had the same dean the entire time we would never have been able to get eight years of funding. We needed the same person to go back [to the legislature] every year,” he says.

“We share information and we also try to find best practices and the best ways for med schools to track and measure their progress in these areas,” Larson adds.

AAMC established UU-Health jointly with the Coalition of Urban Serving Universities/Association of Public Land-grant Universities and the National Institutes of Health.

Tammy Mentzel, a research associate in the College of Nursing and project manager of UU-Health at the University of Cincinnati, says project leaders compared the ethnic and racial makeup of Hamilton County to the enrollment in the university’s health center colleges.

The project leaders found they were matching with all groups except African-Americans, so they set a goal to increase it to 12 percent by 2019. The Hamilton County’s African- American 2010 census population was just above 25 percent, while the university’s health centers were at 8 percent in 2012. The University of Cincinnati’s program includes nursing and other health care professions in addition to physicians.

Mentzel says early initiatives include scholarships for a six-week summer bridge program, research and mentor opportunities, and support for housing. She says there is also a “mini medical college” and other pipeline initiatives, along with a social media video project that targets underrepresented minorities.

It should be noted that Primary Care HPSAs do not count the availability of other primary care providers in the area, including nurse practitioners and physician assistants. However, Nivet points out that a workforce dearth exists in those professions as well.

“It’s not just a matter of replacing physicians with a nurse practitioner or PA. There’s a workforce shortage, a need for all of those individuals in these communities,” he says. Nivet also says that it’s not just primary care practitioners that are lacking in underserved communities.

“We don’t have enough surgeons in these communities either, and there’s a shortage of psychiatrists as well. They need all kinds of physicians,” he notes.

Nivet says that as more people from low-income and minority communities become insured through the Affordable Care Act, that need is going to become even more critical.