According to a petition circulating among the Columbia University community, dining service workers are forbidden from speaking in Spanish and were forced to eat their meals in a closet during their breaks for multiple months. Student-Worker Solidarity (SWS), a group of Barnard College and Columbia University students, said that they co-wrote the petition with some workers from the Blue Java Coffee Bar in Butler Library.

SWS organizers say that Vicki Dunn, executive director of Columbia Dining Services, informed dining service workers present at an August 2014 workers orientation meeting before the start of the new school year that they were not permitted to speak in Spanish around students. That rule applied to workers at the Blue Java Coffee Bar who told SWS members that they were also not allowed to sit in the lounge space, which was reserved solely for student use. Instead, the workers were asked to sit in a small nearby closet during their breaks. 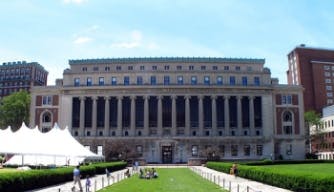 The closet, which is also used for storage, only has enough space for one person to sit in while eating, leading to a sense of isolation for workers who were already being discouraged from speaking in their native tongue. Since there is no break room for workers at Butler, workers’ options were limited to the closet or traversing the campus to go to an alternative location.

Workers told SWS that they were afraid of retaliation from their supervisors if they complained. As a result, only two of the eight workers at the coffee bar agreed to co-write the petition. An SWS organizer who agreed to speak to Diverse anonymously said that the group cannot share the names of workers for fear of endangering their employment.

SWS members say that they became aware of the situation after noticing that workers were eating in the closet and that some appeared to be reluctant to speak Spanish with Spanish-speaking students. “I personally don’t go to that café very often, so I didn’t notice a change. But there are members who have said that they’ve noticed a change in how staff interact with them and how staff behave, depending on whether or not management is around,” said Jada Young, SWS organizer and a Columbia University sophomore. After speaking with SWS members, workers confirmed that they were asked to eat in the closet and that they had been told to not speak Spanish. In addition, SWS members said that a supervisor sometimes monitored workers to make sure they did not speak Spanish.

Young said that more than 4,000 Columbia and Barnard students have signed the petition as of Sunday night. SWS has a core constituency of about 25 students and started up three years ago with the goal of checking up on working conditions at Columbia.

Although there are only eight workers at Blue Java Coffee Bar, SWS members believe that the implicit policies they have helped bring to light may also be impacting other workers on the Columbia campus. A key element to the story is that none of the policies was ever formalized and written down, making them harder to prove or change.

However, SWS members say that there is some indication that Columbia dining administration is aware of the practices. In early April, SWS members emailed Dunn about workers using the closet as their break space. SWS members say that, subsequently, Dunn emailed the Butler Lounge management telling them to allow workers to use the lounge again.

Columbia denies having a policy against employees speaking in other languages. According to an emailed official statement, sent from a Columbia communications department spokesperson, “The issue in Columbia Dining appears to stem from an isolated incident in which an employee made a comment about an exchange with a student in another language. The student understood the comment and submitted a complaint. The department took prompt action to remedy the issue. The issue was not about speaking another language, but about the customer service exchange.”

The statement continued, “Absent of any other information, this appears to be at the root of the issue. Columbia Dining has not received a grievance from the staff at the location.” Columbia is currently investigating the matter.