After more than 50 years serving in academia and the government, Dr. Arturo Madrid, recipient of Diverse’s Dr. John Hope Franklin Award in 2009, stepped down from his faculty position at Trinity University, San Antonio, in 2016. In his retirement he plans to remain in San Antonio and will continue to represent Trinity in various capacities. 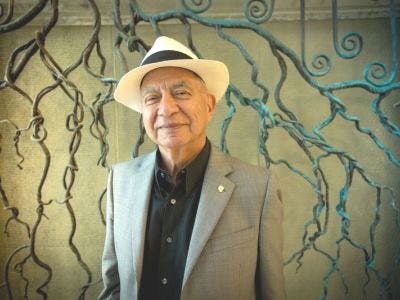 Madrid’s career took him across the United States, serving at a dizzying array of institutions and organizations, including the Ford Foundation, the Fund for the Improvement of Post-Secondary Education (FIPSE), and the U.S. Department of Education.

Throughout his career, he kept his sights on two overarching goals, Madrid tells Diverse in a phone interview.

First, he sought to develop the intellectual resources of the Latino community. He helped develop organizations, research centers, fields of study such as Chicano studies, and worked to increase the number of Latinos in the academy.

Having come up through the ranks of academe when affirmative action was just beginning to take hold, Madrid has been witness to the transformation of the academy and the growing strength of Latino intellectual power.

Yet the struggle is far from being over today, he says. While the number of Latino students enrolling in college is growing by leaps and bounds, the percentage of Latino faculty overall has barely budged.

The most recent available data from the National Center for Education Statistics (NCES) found that Latinos represented 4 percent of all full-time faculty in 2014 and 16 percent of all undergraduate students. Ten years prior, Latinos made up 2 percent of faculty and 11 percent of undergraduates. So while there is improvement, the representation of Latino students is outpacing that of Latino academics.

“We have to be very realistic about the situation,” Madrid says. “The reality is that there are fewer and fewer opportunities in higher education in the academic ranks in particular, at a moment when the number and percentage of Latino students in these institutions is growing and will continue to grow for the foreseeable future.”

He is frank about the challenges that many face in gaining admission to the academy today. For young people, academia is no longer quite as attractive as it once was.

As it is harder than ever to get a full-time, tenure-track job, particularly in fields like the humanities and ethnic studies, the cost of spending years to earn a Ph.D. without the certainty of gainful employment at the end looks ever more like a risky proposition.

Yet there are a few bright spots here and there, Madrid says, in the form of programs that have successfully moved Latino students through to a doctorate and helped them find an academic position afterward.

However, even these concerted efforts are not enough to keep the numbers growing at the pace they need to.

Although San Antonio is now his home, Madrid is originally from New Mexico. His family’s history in the state is the subject of his most recent work, In the Country of Empty Crosses, which traces their conversion from Catholicism to Protestantism.

The conversion made them strangers from the community of their old faith.

Though he has not lived in the state for some time, New Mexico retains an affectionate hold on him. “It’s not easy to leave New Mexico and many New Mexicans come back as soon as they can,” Madrid muses.

Yet his willingness to leave opened up doors that might otherwise have been closed to him, he says. After obtaining a doctorate in Hispanic languages and literature at the University of California, Los Angeles, Madrid chose to move to Hanover, New Hampshire, unlike many of his colleagues, who remained in California to pursue their academic careers.

Madrid’s experience at Dartmouth “expanded my world and my experiences and my contacts considerably and gave me validations that have been enormously important for me,” he says.

The college was then still all-male but was just at the cusp of bringing in a more diverse set of students and was also engaged in protests against the war in Vietnam.

After five years at Dartmouth, Madrid went back West in 1970, for a faculty position at the University of California, San Diego. At the time, it was still difficult for Latinos to advance up the administrative ladder within the UC system, so he later moved to the University of Minnesota, where he was a dean in the College of Liberal Arts.

“Many, many years ago, when I left D.C. after I had served as the director of FIPSE, I was asked by a friend and colleague what my future held,” he tells Diverse. “I said, ‘It looks like I won’t be having much of a national role in the future, and I’ve gone the institutional route, but I’ve never had a local praxis.’”

He found that local praxis in San Antonio, where he joined the faculty at Trinity University in 1993 and served on the boards of multiple cultural institutions in the city, including the San Antonio Museum of Art and the Guadalupe Cultural Arts Center (GCAC).

GCAC was founded in 1980 with the goal of preserving and celebrating Chicano, Latino and Native American art of all disciplines and to raise its profile in a city where paradoxically it was overlooked, despite its vibrant and historic Latino community.

Change has been slow, Madrid says, but it is coming.

Although the dearth of Latino representation in San Antonio’s arts and cultural institutions is all the more striking due to its demographic identity, the same problem is apparent across the United States.

“At the local level, people are pushing constantly and saying, ‘Hey, we are part of this nation, we need to be visible and represented,’” Madrid says, adding that, after grassroots efforts, local corporations are often the next to get on board, recognizing the economic opportunity available in reaching the Latino demographic.

At the governmental level, change is slower still, but institutions like the Smithsonian Latino Center are important cultural milestones symbolizing a greater recognition of Latino and Chicano contributions to arts and culture, Madrid says.

During his early years at Trinity, Madrid also found time to serve as the founding president of the Tomas Rivera Center, the first institute in the nation for policy studies on Latino issues.

After finishing work on In the Country of Empty Crosses, Madrid says he realized that it is finally time to document the work that engaged him throughout his career.

“Simply, it’s important to document what we did over the last 50 years and why we did it,” Madrid says.

Catherine Morris can be reached at cmorris@diverseeudcation.com.