WASHINGTON– Leaders and individuals committed to the success of Latino students in higher education gathered for a collaborative panel discussion following the release of Excelencia in Education and Gallup’s report “Examining Life Outcomes Among Graduates of Hispanic-Serving Institutions (HSIs).” 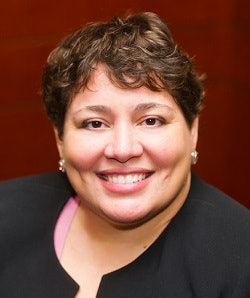 Presentations and panelists expanded on the organizations’ report findings, which revealed the significant impact that HSIs with intentional and supportive strategies play in preparing Latino students for the workforce, while also positively affecting their overall well-being.

“When you talk about success … it is equally important [to note] how a student’s education supports their future lives,” said Sarita E. Brown, president of Excelencia in Education, in opening remarks.

With 65 percent of all Latino students enrolled at HSIs, Brown added that the institutions should be looking at their data to move forward on increasing Latino student success.

Report findings highlighted several strategies that proved to be effective for increasing Latino achievement in higher education and opportunities to improve:

In addition to the findings that showed the effect of inclusive environments and intentional leadership decisions on policy and practices for Latino student success, Dr. Deborah A. Santiago shared that HSIs have an opportunity to propel students into the workforce by imbedding career competencies in the curriculum, enhancing experiential learning and paid internship opportunities, partnering with employers to build pipelines and implementing “intrusive advising” to inform students about career prospects.

Noting the distinction between historically Black colleges and universities’ designation due to their service-mission and HSIs’ sole designation based on Latino enrollment, Santiago, chief executive officer of Excelencia in Education, emphasized that HSI leaders must be intentional about serving their Latino students.

“We’ve got to deconstruct what it means to serve,” she said. “You can serve Latinos while serving all.”

Dr. Anne M. Prisco, president of Felician University, is one of the presidents for Latino Student Success in Excelencia’s network. In her time at the university, Felician worked to close equity gaps in retention rates for students of color.

“We worked really hard to achieve that,” Prisco said. “We believe our diversity is our strength.”

In addition, the university actively recruits Latino students, hosts financial aid nights in Spanish and English, engages with the community and employers for STEM and other programming and trustees even started a scholarship fund for students to take unpaid internships.

“Those are the types of things I’m proud to say we’re excelling at,” Prisco said.

Dr. Lisette Garcia, senior vice president and chief operating officer of the Hispanic Association on Corporate Responsibility (HACR), said what struck her most about Excelencia’s report was the intentionality of institutions and organizations to support Latino students’ success.

Speaking to the workforce component of the pipeline, Garcia said organizations need intentionality in supporting Latinos “in order to address the changing demographics in the U.S.” to ensure the future workforce is prepared.

Without this intentionality, companies are missing out on diverse talent that could fill roles.

Erin White, senior director of product development and research at STEMconnector, pointed out that the majority of Latinos in the science, technology, engineering and mathematics fields come from HSIs.

When she thinks of the STEM gap for Latinos and other minority groups, “it’s really a gap of opportunity,” White said. She works to help organizations deconstruct and reconstruct their ideas of what it means to hire, retain and attract groups into STEM.

“Adult behavior-change is really hard,” White added, offering an example of having to turn off the Wi-Fi to modify her own children’s cell-phone behavior.

“Companies that don’t get it, they’re about to have their Wi-Fi turned off,” she cautioned. “They’re leaving dollars on their table. They’re leaving opportunities on the table.”