cmaadmin (EDU)
Feb 11, 2019
A career in international conflict resolution has been on Ava Greene’s radar, and the Spelman College senior learned more about the possibilities when she was selected to attend a new fellows program in Washington, D.C.

The Cox-State Department Diplomacy Seminar, a three-day career-exploration program, is a diversity initiative designed to expose students at historically Black colleges and universities and Hispanic-serving institutions to careers in foreign service.

“It was extremely helpful,” said Greene, an international studies major. “I wanted to get more information and it was a good opportunity to learn. The most impactful part for me was actually meeting foreign service officers and speaking to different people and hearing about their journeys getting to the State Department. It just gave me another option for my life.”

Greene, who is exploring graduate school programs that would further her career aims, was one of 27 college students selected to be part of the inaugural seminar last November.

The Una Chapman Cox Foundation had worked with the Penn Center for Minority Serving Institutions at the University of Pennsylvania to survey HBCUs and HSIs about their students’ exposure to diplomatic careers and obstacles, said foundation program manager Nicole Brzozowski.

The Cox Foundation collaborated with the U.S. Department of State’s Office of Recruitment, Examination, and Employment and the CloseUp Foundation to develop and launch the pilot seminar.

Organizers hoped to get 100 applications and were pleasantly surprised to receive about 250, said Brzozowski.

The fellows, undergraduates at schools in 19 states, were exposed to a range of speakers and experiences, including a U.S. Diplomacy Center simulation, ambassador visits, off-the-record small-group time with foreign service officers and dinner with Pickering and Rangel fellows.

“It was an exciting first for us and for our students, many of whom said they were interested in international affairs but did not know where to look for resources and support,” said Brzozowski. 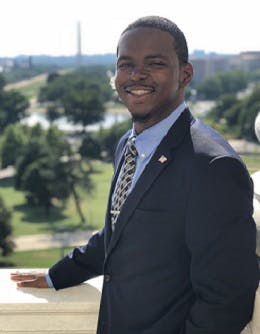 Angelica Guerra, a sophomore at Texas Southmost College, said the experience was highly informative and caused her to consider minoring in international affairs and pursuing a career that combines business and diplomacy.

“It definitely shifted me toward that. It opened my eyes,” she said, describing the impact of interacting with public service personnel and watching the “American Diplomat” podcast be recorded.

The program was so successful that Cox Foundation trustees approved a second seminar for this fall.

“I was a little anxious because we had never done anything like that before, but it really worked out,” said ambassador and Cox Foundation executive director Lino Gutierrez.

Whether students knew nothing, a little or a lot about diplomatic careers didn’t matter, he said.

“I was very impressed with the quality of attendees. They gelled together very nicely. It was heartwarming to see they were extremely attentive.”
The program is important to diversifying the occupational field because some students, particularly from immigrant communities, often are steered toward education, law or medicine by parents who view those careers as the best paths to achieving the American dream and contributing to society, said Gutierrez.

“Nobody thinks diplomat right away, so we wanted to plant that in their mind as a possibility,” he said. “The world is getting smaller with social media and other things, and there’s a lot of interest in going overseas. Diplomacy represents an opportunity to do that.”

Along with an expressed interest in learning more about public service careers, applicants were required to submit an unofficial college transcript and an essay about what they hoped to gain by attending the seminar, said Brzozowski.

“A misconception about foreign service is that it is for people who have studied international affairs,” she said, noting that fellows were majoring in fields such as criminal justice, economics, business and communications – not just international relations.

Application essays revealed that students were seeking a support system of other students who were “passionate and interested” in public service careers in the international arena, said Brzozowski.

“Their passion and drive were very clear from the beginning of the program,” she said. “I was especially impressed by how they jumped into an experience that they may or may not have known much about. Some knew they wanted to be diplomats, but the majority were attracted to the public service aspect. I don’t think a single student let a moment pass by where they didn’t learn something.”

The seminar fit neatly into career plans long in the works for fellow Jeffrey Simmons Jr., a senior at Florida A&M University. The political science major became interested in a foreign service career as a freshman and immediately sought out a diplomat-in-residence who was stationed on the university’s campus.

“It was a wonderful opportunity to explore a career in international relations without having to fully commit,” said Simmons, who plans to earn a master’s degree in intercultural relations and international communications at American University.

“And you left that opportunity with a wealth of knowledge about the field with people you could directly connect to, to learn more about it.”

He was impressed with the diplomats and other speakers, the simulation activity and a workbook full of information to take home and share with others.

“I was happy to see how much it helped those who had little or no information about diplomatic careers,” said Simmons. “The program was detailed and very well organized. They went above and beyond.”