In September 2017, hurricanes Irma and Maria blasted through Puerto Rico and wrecked Inter American University’s campus in Arecibo and left many of its students displaced. Following the storms, student enrollment tumbled.

And with damages that total $2.3 million, the university continues to rebuild and recover. Over 170-mile-per-hour winds shattered windows in the administration building, and seven classrooms were destroyed.

“We lost power,” says Dr. Rafael Ramirez-Rivera, the university’s chancellor. “We lost internet. We lost drinking water from the faucet.”

Two years later, like most of the island’s communities and people, the campus still struggles to rebuild. Inter American University is not alone. Hurricane recovery is still underway at Puerto Rico’s other colleges and universities.

Hurricane Maria, which touched down within two weeks of Hurricane Irma’s landfall, was one of the deadliest and costliest natural disasters in U.S. history. It left nearly 3,000 people dead and thousands more displaced. 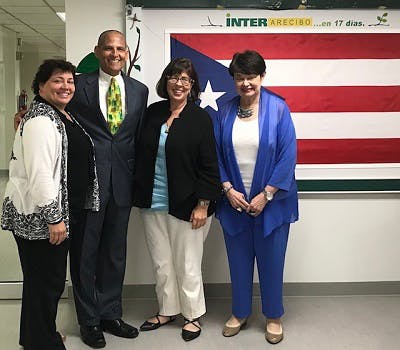 “We still have more than 20,000 houses that their roofs are blue tents,” Ramirez-Rivera says, and students who live in those tents are forced to choose between working to support their families, going to school in Puerto Rico or leaving for the U.S. mainland.

But Sarita Brown, president of Excelencia in Education — an organization that promotes Latino student achievement — says now, the story of Puerto Rico’s higher education institutions is one of “resilience and commitment.”

At Inter American, Ramirez-Rivera is one of them. Just a day after Hurricane Maria pummeled his campus, the chancellor showed up for work at 6:30 a.m. About 150 other staff joined him. Ramirez-Rivera said many of his employees chose to come to work, even as their own lives and homes were left vulnerable by the hurricanes. Some even waited in gas lines for 4-5 hours before they could make it to campus. Inter American provided laundry services for students who lost their homes and set up generators to charge phones and computers. And with students’ help, Inter American’s Arecibo campus served over 6,000 meals to people in the surrounding community.

Ramirez-Rivera praised his students for being resilient and leading in the aftermath of the storm. “The leadership these students demonstrated coming to school and wanting to help, they taught us to manage these kinds of situations.”

This spring, the school moved on from repairing to building, inaugurating a new Multi-Disciplinary Academic Learning Lounge where students can study and meet with advisors. Ramirez-Rivera says the building is the first new construction in the city of Arecibo since the hurricanes hit. Meanwhile, student enrollment — which had fallen from 4,326 to 3,945 following the hurricanes — bumped up to 4,001.

“We didn’t want our students to think there was no hope,” Ramirez-Rivera says. “We worked so hard. We’re so proud of it.”

Similarly, Ana G. Mendez University’s Gurabo campus sprang into action despite suffering “massive” damage of between $8 million and $10 million, says Chancellor David Méndez. The Gurabo campus, located in the central eastern region of the island, was in the hurricane’s path. His campus serves many non-traditional students. And 98 percent of those who enroll are receiving federal financial aid.

Recovery and the Big Reveal

To begin the recovery process, Méndez says, “We had to really get in business immediately.”

The Gurabo campus served as a “resource center for the community,” he says, offering internet and generator access to the surrounding community. It also redirected scholarship funds to food vouchers for students — and sometimes their families — and sought to replace destroyed backpacks, computers and textbooks.

Without four walls or electricity, faculty turned tents and outdoor spaces into their classrooms.

“Professors had to come up with very creative ways to offer their courses,” Méndez says. “I’m looking at it from a positive perspective. We’ve become so used to technology that we literally had to go back to basics.”

A year later, the Gurabo campus has recovered, and the university has developed a strategic plan to deal with future disasters. “What we really learned from the experience is that we should have a plan A, plan B and plan C,” Méndez says.

The hurricanes, Méndez adds, taught costly and important lessons. He says that the storms also “uncovered and unveiled all the realities Puerto Rico has been dealing with for a long time: changes in demographics, the economy, political dynamics and culture.”

But one of the biggest challenges Méndez and others in Puerto Rico’s higher education community face is the uptick in migration from Puerto Rico to the U.S. mainland, particularly among students, a problem highlighted and exacerbated by the hurricanes. His own campus “lost a lot of people. It’s been happening for a long time.”

For Méndez, recovery is over, but now it is time for reflection. The hurricanes’ devastation revealed a suffering economy. It has prompted institutions like his to focus on preparing students for a difficult job market. The campus employment center is “quite active,” and the decade-long entrepreneurship program at the Gurabo campus is still a focus, Méndez adds. But beyond the campus, he wants to “generate financial resources” that will also benefit those who are the university’s neighbors.

According to Méndez, as much as the hurricanes have exacerbated the region’s problems, they’ve also “unveiled opportunities” for his campus to examine them and devise solutions.

Brown and Santiago of Excelencia in Education agree. Despite their setbacks, colleges and universities in Puerto Rico, they say, can serve as “trendsetters” for other institutions trying to thrive despite a natural disaster, an economic downturn or political turmoil.

On their recent tour of campuses in Puerto Rico, Santiago and Brown also observed a different kind of transformation that’s underway. Beyond restoring physical spaces, many colleges and universities are focused on efforts to not only recruit and retain more students, but to motivate them to stay in Puerto Rico.

“We believe institutions of higher education are the standard bearers that give society some level of stability but also continue to be the place where students live their lives, find themselves, learn, discover how to meet their needs and move forward,” Santiago says. “And to do it on that island, which is recovering still and going through a turnover of government — the aftereffects are still with us when we think about what they’re doing there.”