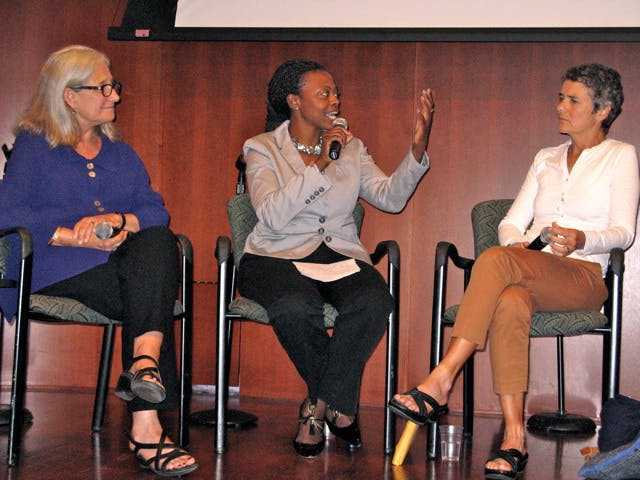 NEW YORK –  The documentary Forty Years Later: Now Can We Talk?, the story of the first African-American students to integrate a White high school in Batesville, Miss. in 1967, premiered with exactly the dialogue the filmmakers hope to promote.

Dr. Lee Anne Bell, the director of education at Barnard College, has taught and written about storytelling as a means of teaching about racism. Several years ago, when Cheryl Johnson, a 1969 graduate of South Panola High School in Batesville, Miss., received an invitation to a high school reunion for the very first time, she searched the Web to find someone who could help her and her African-American classmates tell the story of their experiences. Johnson found information about Bell’s book Storytelling for Social Justice: Connecting Narrative and the Arts in Antiracist Teaching and contacted Bell.

Last Thursday, the film, which examines the experiences of 13 African-American students who attended South Panola from 1967 to 1969 from the perspective of those students and 13 of their White classmates, premiered at Barnard College in New York City. The screening was followed by a panel discussion in which Bell, the film’s executive producer, was joined by director Markie Hancock and Dr. Yolanda Sealey-Ruiz, assistant professor of English education at Teachers College.

Moderator Dr. Monica Miller, an associate professor of English and Africana studies at Barnard, posed this question to the panel: “What was the most difficult part of the film?” Hancock said the lack of dramatic and meaningful closure a filmmaker might hope for.

The film has three segments — one with the Black alumni, one with the White alumni and a joint gathering. In the film, during the session with the White alumni, one man did say he was sorry for what his Black classmates had endured, and during the joint filming with both groups, another man said the Black alumni were heroes in the fight for civil rights, but there was nothing more.

“We did not have, in my mind, the big breakthrough that would have given us this nice arc — a beginning, middle and end,” Hancock said. “We realized it had to end in many ways the same way it began, which is with a question.”

Miller also asked: “What do you think the value of the film is for educators and how should it be used in educational settings?”

Sealey-Ruiz, who was not involved with making the film, replied that the film’s invitation to engage in conversation has tremendous value.

“Conversation, dialogue can be used to expose the cruelty of racism, but also give ways to move forward,” she noted. She detailed four ways she thought the film could be utilized. First, holding forums like the one surrounding the premiere, especially with wider audiences that bring people from different perspectives together. Second, in terms of academia, on the departmental and program levels, having faculty watch the film and talk about the implications of the film for their teaching. Third, showing it in classrooms. Fourth, screening it in communities that have a racial divide and opening discussion. She added that it should also be shown at educational conferences.

“We don’t as a society really encourage honest, cross-race dialogue or provide the kind of context and skills that would help people to do that well,” said Bell. “So I’m interested in how this might provoke us to think about how to have dialogue today in the current context.”

Sealey-Ruiz said the film gives historical framework to modern problems. She noted that like armchair quarterbacks, it’s easy to criticize the White alumni from afar.

“In a teaching moment where we’re doing racial literacy roundtables, you want more, but you have to understand this is where these people are in the process,” she said. “It doesn’t mean you stop wanting more or expecting more, but at the same time you have to understand the individuals and where they are at in that moment. That’s the truth of the film. It wasn’t tied with a bow. It started and ended the same way way — with a conversation.”

Bell is currently writing a facilitation guide to accompany the film. She is in the process of working out details for distribution of the DVD and guide.