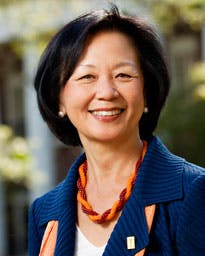 Chancellor Phyllis Wise says the hiring plan is part of an initiative intended to turn the campus into the top public land-grant university for research.

URBANA, Ill. — The University of Illinois plans to hire 500 professors during the next five to seven years to beef up a flagship campus faculty depleted by retirements and departures, Chancellor Phyllis Wise says.

Wise is the top official at the Urbana-Champaign campus. She told faculty members and staff at a town hall meeting Monday that the faculty hiring plan is part of an initiative intended to turn the campus into the top public land-grant university for research.

“All I can say is: Be ready to move,” she told the crowd, according to The News-Gazette in Champaign.

The campus’ tenured faculty has dropped from about 2,100 in 2007-08 to 1,856. Retirements, departures for jobs elsewhere and hiring freezes are responsible for the drop.

Beefing up the faculty “is how we bring new energy” to the campus, said Provost Ilesanmi Adesida. His office oversees faculty hiring.

Faculty hires will be grouped in six different areas identified through what the university calls its “Visioning Future Excellence” process, something Wise started when she arrived on campus a year and a half ago. People Wise met during visits around campus were asked to think about the world’s most important challenges and how the university could address them.

Those six areas are economic development, education, energy and the environment, health and wellness, information and technology, and social equality and cultural understanding.

“We will focus on bringing in groups of faculty, some at the senior level, who can help us address the grand challenges even more effectively than we currently do,” said Barbara Wilson, executive vice provost for faculty and academic affairs.

A university spokeswoman did not immediately respond to a call from The Associated Press about how the new hires would be financed.

Administrators also said Monday that the university wants to continue with other parts of the initiative, including $70 million in classroom renovations.

Computer science Professor Roy Campbell, who was at the meeting, said he was impressed by the ideas and administrators’ willingness to listen to input from faculty.

“The chancellor and the provost are working as a team and they’re working with faculty, which I’ve been very impressed with,” Campbell said.