Toni Morrison’s Papers to be Housed at Princeton University 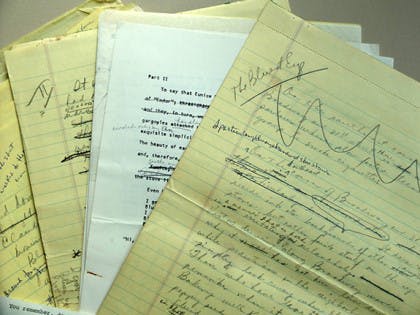 The papers of Nobel laureate Toni Morrison are now part of the permanent library collections of Princeton University, where the renowned author served on the faculty. Photo by Don Skemer, Department of Rare Books and Special Collections

The papers of Nobel laureate Toni Morrison will be housed in a permanent library collection at Princeton University, according to the university’s president, Dr. Christopher L. Eisgruber.

Eisgruber made the announcement over the weekend during a Black Homecoming event on campus that included a special appearance by Morrison.

“Toni Morrison’s place among the giants of American literature is firmly entrenched, and I am overjoyed that we are adding her papers to the Princeton University Library’s collections,” Eisgruber told Black alumni. “This extraordinary resource will provide scholars and students with unprecedented insights into Professor Morrison’s remarkable life and her magnificent, influential literary works.”

News that Princeton and not Morrison’s alma mater, Howard University, had secured her papers was greeted with mixed reaction on social media sites. Some Howard alumni said that they had hoped that she would donate her papers to the school’s Moorland-Spingarn Research Center, which is the repository for dozens of prominent African-Americans.

It’s also unclear if Howard was even involved in the arms race to secure Morrison’s papers. Howard Dodson, who directs the Moorland-Spingarn and Howard University Libraries, has been friends with Morrison since his days as chief of the Schomburg Center for Research in Black Culture, a unit of the New York Public Library.

“It certainly would have been ideal had [Morrison] left the papers to Howard or at least a meaningful selection of the papers to Moorland-Springarn,” said Dr. Dana A. Williams, who chairs the English Department at Howard. “The Bluest Eye, which she began in a writing group at Howard, would have been the logical choice, for instance.”

Still, Williams said that there were likely other factors involved in Morrison’s decision to reach an agreement with Princeton to house her collection at the university, including the school’s ability to preserve and restore some of the manuscripts that were damaged after a fire gutted her home on Christmas Day in 1993. Unlike Howard, Princeton also has more resources at its disposal to process the papers more quickly.

“Morrison spent the formative years of her life at Howard both as a student and as a faculty member,” said Williams, who teaches Morrison’s books in her classes and who noted that the Pulitzer Prize winning author arrived on campus as a freshman in 1949. “We’ll always have that.”

To be fair, Morrison has been at Princeton for more than two decades. She arrived at the New Jersey Ivy League university in 1989 as the Robert F. Goheen Professor in the Humanities and taught in the creative writing program until her retirement in 2006. She currently holds the title of Professor Emeritus.

In 1994, she founded the Princeton Atelier, creating partnerships between undergraduate students and acclaimed artists and performers. A year earlier, she became the first African-American woman to win the Nobel Prize in literature and has also received numerous other awards including the National Book Award. In 2012, President Obama presented her with the Presidential Medal of Freedom.

According to university officials, Morrison’s papers contain about 180 linear feet of research materials documenting her life, work and writing methods and will be housed in Firestone Library.

“Scholars of Ms. Morrison’s work will get a sense of her process, a detail of her thinking and this will ensure her legacy for generations to come,” said Glaude. “I think it’s a great thing for Princeton and great for African-American letters.”