Relationship between U of Missouri, Lawmakers on the Mend 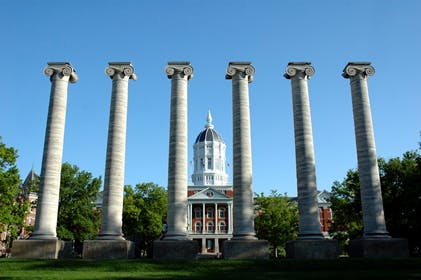 JEFFERSON CITY, Mo. — Tensions between the University of Missouri System and state legislative leaders appear to be dying down after months of turbulent talk and threats of budget cuts following protests at the Columbia campus that attracted widespread, and sometimes negative, attention.

Plus, a major source of ire for lawmakers — an assistant professor whose confrontation with a student videographer during November’s protests went viral — was fired last week.

During an interview Thursday, Senate Appropriations Committee chairman Sen. Kurt Schaefer stopped short of endorsing efforts to restore roughly $7.6 million in budget cuts for system administration, meaning the leadership in charge of overseeing the four campuses. But he’s pushing for a review of the system’s administrative structure and diversity programs, which lawmakers have described as lacking, before lawmakers take any further action.

Richard and House Speaker Todd Richardson, R-Poplar Bluff, both said greater communication from University of Missouri leaders is helping to mend the relationship. And support from legislative leaders and budget heads could save the system from funding cuts at a time when the Columbia campus already has financial issues.

University officials say the flagship Columbia campus could see at least a $20 million loss due to a potential enrollment drop that likely stems in part from the protests over what some saw as administrators’ indifference to racial issues.

After the system’s interim President, Mike Middleton, campus chancellors and dozens of others vied for lawmaker support at the Capitol on Wednesday, he called for additional proposed spending cuts “unnecessary” because he said lawmakers have made their concerns clear.

“We got that message,” Middleton said. “We don’t need another punishment.” He added that relations are better with lawmakers than they were three months ago, but said there’s still work to do.

Last summer, the relationship between the University of Missouri and GOP lawmakers became strained after Republicans accused the Columbia school of aiding a local Planned Parenthood clinic in getting a state license to provide abortions.

It further deteriorated due to the November protests, which included a graduate student going on a hunger strike and some members of the football team threatening to not play a game in support. The turmoil culminated with the resignations of the former system president and campus chancellor.

Since then, the University of Missouri has been a magnet for criticism from lawmakers, ranging from questioning leaders for not acting quickly enough to address student concerns to feeling administrators inappropriately caved to student demands.

And Melissa Click, the now-former assistant communications professor who confronted a student videographer during the protests, calling for “muscle” and a month earlier caught by police body camera video yelling at officers during the homecoming parade, in particular irked legislators.

Curators fired Click last week, but not before House Budget Committee chairman Rep. Tom Flanigan, R-Carthage, proposed a roughly $400,000 cut from the school’s budget for the equivalent of three salaried positions — Click, her division head and the college dean.

The same committee’s budget for the next fiscal year includes a roughly $7.6 million cut to the university system — half of its state funding this year. Columbia Republican Rep. Caleb Rowden tried Tuesday to restore about $3.8 million, but it was voted down.

“I’m not so convinced some of these changes are taking place in the short term just to get this committee and the appropriation problem off their back,” said St. Louis Democrat Rep. Genise Montecillo, who said she continues to have “grave concerns” about racial issues on the Columbia campus.

Schaefer has pitched a resolution to create a commission to review practices in the university system, including its administrative structure and diversity programs.

“It gives us a little bit of time to step back,” said the Columbia Republican who is the Senate Appropriations Committee chairman and is running for attorney general. He added that the commission could provide objective information to use before lawmakers “make long-term decisions that potentially could be negative for the university.”

Flanigan has since backed off other proposed cuts and called Rowden’s request “a step in the right direction.” He also said that Schaefer’s proposal relieves pressure that built up in the Capitol amid growing disappointment with the University of Missouri.

“They didn’t get in it overnight,” Flanigan said Wednesday after the rally. “They’re not going to come out of it overnight.”

The full House is set to debate the proposed budget, including the cuts to the University of Missouri, this week.

President of Austin HBCU, Huston-Tillotson University, to Retire in June 2022