For Dr. Raheem A. Beyah, the journey toward a career in teaching cybersecurity began with a simple desire to make sure his mother wouldn’t have to struggle.

He recalls how his mother, a single parent, used to work three jobs — two in doctors’ offices and  one at a retail store — in order to make ends meet. 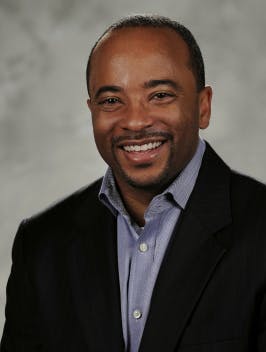 “My mom had just such a really hard time and I realized at an early age, 14 or 15, the only way to help her out of this situation, the only hope was I had to step my game up,” says Beyah. “I figured at that point the only way out for us was academics.”

Beyah says overnight he became a 4.0 student and plowed “100 miles an hour” through college and graduate school. He has been going strong ever since.

Today, Beyah is Motorola Foundation Professor and associate chair for strategic initiatives and innovation at the School of Electrical and Computer Engineering at the Georgia Institute of Technology.

“I’m living a life now that I never dreamed even existed, which is just crazy,” says Beyah, who is a proud graduate of the Atlanta public schools.

“I’ve traveled all around the world, been all sorts of places and done interesting things, talks in China and Spain.”

Such are just some of the privileges and benefits that come with being a leading expert in one’s field.

Dr. Gary S. May, dean and Southern Company Chair at the College of Engineering at Georgia Tech, says Beyah is “internationally recognized for his research contributions in cybersecurity, an area of research and teaching that touches anyone who has been on the Internet.”

May notes that Forbes has repeatedly cited how Beyah recently discovered vulnerabilities in the power grid infrastructure that affect thousands of devices used to power the world’s critical infrastructure.

He also says that Beyah has “excelled in each of the metrics typically associated with success as a faculty member in a major research institution.”

“His publication record — 103 technical manuscripts at last count — demonstrates quality and quantity of his technical contributions,” May says, noting that Beyah’s research has participated in the acquisition of nearly $9 million in external research funding, including grants from industry and governmental agencies that range from the Defense Advanced Research Projects Agency, or DARPA, to the National Science Foundation, or NSF.

“One of his DARPA grants is particularly prestigious because recipients participate in a Computer Science Study panel, charged with crafting solutions to the United States’ most important computer science challenges,” May says, adding that Beyah was one of just 12 junior U.S. faculty members chosen annually to participate in this program.

May commends Beyah for his longstanding commitment to three programs that seek to increase the enrollment of graduate students.

Namely, Beyah serves as director of the Summer Undergraduate Research in Engineering/Science, or SURE, program and was a coordinator of the Facilitating Academic Careers in Engineering, or FACES, program. May says Beah has not limited his impact to formal programs.

“Where there is an opportunity to lift as he climbs, he seizes that opportunity,” May says.

“He informally mentors a number of Ph.D. students at Georgia Tech, helping them navigate their graduate programs and beyond.”

Beyah says his goal is to figure out how to get more minorities into computer science and particularly cybersecurity.

“If you hire more in certain areas, you can get more graduate students in those areas,” he says. “And if you do it over and over again, now you’ve diversified.”