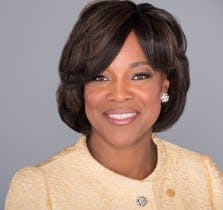 Dr. Valerie Montgomery Rice has no sad tales about being discouraged from pursuing a career in medicine, no stories of teachers or guidance counselors who said it would be too difficult.

Sure, the naysayers existed, but Montgomery Rice was oblivious to them. “Sometimes I heard those things in the background, but I always assumed the negative messages were for somebody else, and not for me,” she recalls.

As the daughter of a single mother who worked in a Georgia paper factory to support her four daughters, Montgomery Rice says she was taught that “all things were possible.” That included excelling in math and science, attending Georgia Tech and Harvard Medical School, and completing her residency in obstetrics and gynecology at Emory University.

“Sometimes we discourage our young people into thinking that something is too hard for them,” she says. “I’m a proponent for not letting people self-select that they can’t do something. What if we told every child that everything they dream is possible? What would hold them back then?”

Montgomery Rice has continued to follow the positive forces in her life and to ignore any that would hold her back. She was recently appointed Morehouse School of Medicine’s sixth president — and the first woman to head the historically Black medical institution in Atlanta.

Montgomery Rice arrived at Morehouse School of Medicine (MSM) in 2011 as dean and vice president, a position she held until she took over as CEO and president in July. She also continues to hold the position of dean as part of an administrative consolidation by the school’s Board of Trustees. She succeeded Dr. John Maupin Jr., a dentist, who had served as president since 2006.

Susan Grant, executive vice president of CNN News Services and vice-chair of MSM’s Board of­ Trustees, tells Diverse that the board’s choice of Montgomery Rice was part of a years-long process.

“When we brought her on as dean we had already made the decision if at all possible that we wanted to combine those two positions and that our intention was for that person to be Dr. Valerie Montgomery Rice.

“She has a very, very high standard for excellence,” Grant says. “She has an exceptional ability to communicate, to listen and to connect with people. She created an immediate sense of community with the faculty and the clinical practice, and the external stakeholders from a donor and fundraising aspect with a focus on scholarship and growing the student body.”

Mongomery Rice says she is committed to MSM’s mission and its traditions, along with its new goals. “We were founded to address the physician shortage in the state of Georgia and in the nation. Over the years we have changed our mission statement to say that part of our mission is also to address the health care professional shortage in the nation, because we recognize that it’s really a team effort. And we always want to diversify the health care workforce … and to help create health equity in this state and in the country.”

The new president cites recent health statistics about Georgia that highlight some of the inequities. For example, the Georgia Board for Physician Workforce reported that, as of 2010, 33 of Georgia’s 159 counties had no OB/GYN, four had no internal medicine physician and 27 had no pediatrician.

Montgomery Rice explains that MSM seeks to help relieve the shortage through its partnerships with institutions in the state, including Grady Memorial — which is its primary Teaching hospital — Emory University Medical School and Georgia Tech, among others.

Montgomery Rice previously Held leadership positions at Meharry Medical College in Nashville, Tennessee, and the University of Kansas School of Medicine. Her research has included being site principal investigator on a study to determine the sensitivity and specificity of 2D ultrasound examination of fibroids compared to the 3D ultrasound; and site principal investigator on the women’s health, osteoporosis, progestin, and estrogen (HOPE) Study, a multi-center clinical trial evaluating the efficacy of low-dose hormone therapies.

MSM’s 2014-15 enrollment is 406, of which 278 are in the M.D. program, according to its online statistical report. MSM conferred 79 degrees in 2014, 52 of them M.D. degrees. The school also has graduate programs in disciplines such as public health and biomedical research.

Morehouse School of Medicine was founded in 1975 as the Medical Education Program at Morehouse College. In 1981, MSM became an independently chartered institution. Unlike Morehouse College, an all-male institution, MSM is co-educational, and a majority of its students are female. Both are part of the Atlanta University Center Consortium, which also includes Spelman College and Clark Atlanta University.