As Dr. Anita Hufft looks to retire this summer, she won’t be leaving a career as an astronaut that she envisioned when she was a youngster – she will depart Texas Woman’s University (TWU) as one of the nation’s foremost nurse educators.

As dean of the College of Nursing at TWU’s three campuses in Denton, Dallas and Houston, Hufft­ is a sought-after consultant and insightful contributor to nursing publications. And she is widely renowned within the nursing profession as an expert on forensic nursing and psychology, psychiatric and mental health nursing and nursing education leadership.

Yet, “I was not one of those people who always wanted to be a nurse,” says Hu­fft, the daughter of World War II veterans who was born in Detroit, spent her formative years in the Philippines and graduated high school in Florida. Her dream was to become an astronaut, and with that in mind she entered the University of Maryland as a chemistry major.

It wasn’t long, however, before Hufft began to consider nursing at the “encouragement” of a “very traditional father” who was a health care administrator in the military and expressed skepticism about her career options with a chemistry degree. A newspaper article about a military nursing program at the university compelled her to switch majors, she says, and she graduated from the Walter Reed Army Institute of Nursing with a bachelor’s degree in nursing in 1970. 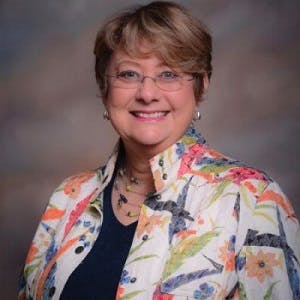 Hu­fft, whose mother was a Woman’s Army Corps medic stateside, later returned to school, earning a master of nursing degree in psychiatric and mental health nursing from Louisiana State University (LSU) in 1976. She went into private practice as a registered nurse and pursued other interests, later going back to school and earning a Ph.D. in nursing from TWU in 1987.

“Teaching was the last thing I was going to do,” Hufft says. But she had already dipped her toes in that pond as a graduate student, when she had an opportunity to teach part-time and enjoyed it.

After earning her doctorate, the Army veteran decided to go into higher education. She had appointments at a half-dozen schools – including LSU, William Carey College and Spalding and Indiana universities – before becoming professor of nursing and dean at the College of Nursing and Health Sciences at Valdosta State University in 2004.

Hufft­ accepted the TWU appointment in 2014, bringing a lengthy list of grants, fellowships and awards that included being named one of TWU’s “Great 100 Alumni” during the university’s centennial and the Forensic Nurse Scholar Award from the International Association of Forensic Nurses.

Her leadership position has numerous challenges, chief among them what she describes as “the rapid change taking place in the health care system and the continuous challenge to stake out where nursing needs to make its contributions – and convincing everybody to get out of the way and let us do it.”

Another source of frustration is that it’s not evident to everybody that “higher education is critical to health care in this country,” she says. “Every nurse should have a minimum of a baccalaureate degree. We need to be clear that professional nursing is a STEM profession. We need people who are scientists and leaders, and so how do we shape the health care system to make that happen?”

Those questions will no longer be foremost in Hu­fft’s mind when she retires, she says, although she will maintain ties to some professional organizations and continue as an accreditation site visitor with the Commission on Collegiate Nursing Education.

She plans to move to Colorado with her husband to be closer to their daughter, grandchildren and other extended family members. She wants to learn how to grow tomatoes and maybe get another dog – this time, one that’s low-maintenance and likes to cuddle on the couch.

“It’s time to step aside and let other people take over,” says Hufft. “If you don’t move out, other people can’t move up. The best gift I can give back to nursing and health care is let other people walk in the places I have been and do a better job.”

Hufft­ will be missed for her leadership and expertise in both the academic and clinical arenas and her awareness of and influence on trends and policy at local, state and national levels, says Dr. Ainslie Nibert, associate professor and associate dean at the College of Nursing’s Houston campus.

“It’s a pretty unique set of accomplishments and skills and talents that she’s not only brought to the university, but also the profession,” says Nibert. “She’s always been forward-looking and forward-thinking. If you don’t change, you can’t grow. I think that characterizes her style.”

As Hufft­ prepares to exit, she ponders the things that have made her career most rewarding.

“Seeing faculty and students succeed,” she says. “Seeing other people have a rewarding career and doing good things. And balancing the budget.”

This article will appear in the February 21, 2019 edition of Diverse.