Dr. Betty N. Adams: A Commitment to the Profession

When Dr. Betty N. Adams’ father told her she would “make a good nurse,” it greatly influenced a child who already had demonstrated a commitment to helping other people, particularly those who were sick.

Adams took his advice and went on to become one of the nation’s foremost nurse educators.

Now dean of the College of Nursing and a professor at Prairie View A&M University — a historically Black university in Texas — she is an expert administrator who has led fundraising to support the expansion of the program and the doubling of the college’s enrollment.

She passionately works to ensuring nursing practice, education, and research of the highest quality. Her contributions to nursing science and theory have been significant through her service on numerous councils and boards, such as the Board of Governors of the National League for Nursing and president of the Texas Organization of Baccalaureate and Graduate Nursing Education.

Adams also serves on the policy, governmental advisory and international affairs advisory councils of the Texas Medical Center and has been published extensively, including in the Journal of Professional Nursing, ­The ABNF Journal of the Association of Black Nursing Faculty and the Journal of Theory Construction and Testing. 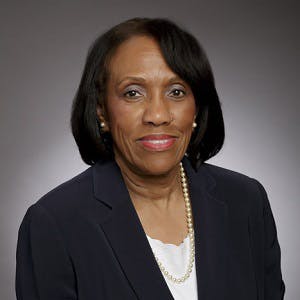 Adams says her work is rewarding in many ways.

“Working with other academics and partners in nursing and health care,” she says, “and supporting and observing students grow and evolve as nursing professionals.”

The passion was kindled when the Morrow, Louisiana native was growing up in Lake Charles. In addition to encouragement from her father, her interest in nursing was fueled by certain academic courses.

“I enjoyed studying science and geography,” she recalls, “especially how people lived and the circumstances they encountered in surviving – characteristics of having a healthy life.”

­The eldest of eight children, she graduated from high school fourth in her class.

“My community, church and family shaped my awareness about self, dignity and the reality and importance of others,” she says.

Adams remained in Lake Charles after high school, earning a bachelor’s degree in nursing from McNeese State University and becoming the first in her family to get a degree in a health profession. Five of her siblings would also venture into heath careers and study teaching, including a surgeon, speech therapist, vision specialist, nutritionist and another nurse.

Adams later earned a master’s degree in nursing from Emory University and a Ph.D. at the University of New Orleans. She also completed a postdoctoral study at Harvard University in management and leadership in higher education.

Adams traces her path to academia and the training of future generations of nurses back to her final semester as an undergraduate at McNeese, when nursing program director Constance White summoned Adams to her office.

“I felt confident that I was in good standing and was looking forward to graduation in four months,” Adams remembers.

White praised her as a good student who had performed well in the program. She told Adams that she wanted to recommend her for a special nursing program at Dillard University and thought she would be successful in it.

“I was shocked and pleased at Ms. White’s message and that she had thought of me,” says Adams.

So she went, not suspecting that she was in store for a life-changing experience.

Her current position at Prairie View naturally has some challenges, she acknowledges.

“­The most challenging is ensuring that students who choose and are admitted to the program are committed to dedicate the time and energy to serve self and society as professional nurses,” she says.

But she is always looking forward to what’s next, which includes engaging the university, alumni and the community in the College of Nursing’s centennial celebration this year, “continuing to serve with our distinguished faculty in the education and success of professional nurses who are committed to health promotion and building a pathway for improvement” and “achieving philanthropic contributions in support of a naming for the College of Nursing.”