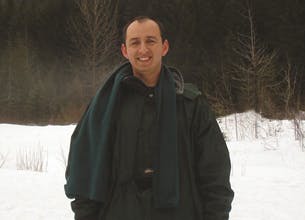 Dr. Gerardo Dominguez
Dr. Gerardo Dominguez says that one cannot ignore one’s own personality. His push to excel academically was fueled by a desire for respect, something not necessarily afforded to a poor Hispanic kid growing up in Los Angeles – except from his teachers, who as a whole, granted him respect due to his academic successes. It was a 6th-grade science teacher who nurtured his sense of wonder about the natural world.

According to Dominguez, “He taught me that science is weird and fun, and it was then that I was hooked!” In high school, he encountered only very basic quantum mechanics in an AP chemistry class. He read a textbook for fun and was eager to learn where the formula for the energy levels of hydrogen came from. The footnote about the solution to a wave equation was beyond the scope of the book and the seed for majoring in physics had been planted.

Dominguez’s passion for science is driven by a desire to understand why the universe is the way it is. Looking back, he realizes that during his elementary school years, his fascination with non-fiction books about volcanoes, dinosaurs and icebergs makes sense.

“I am interested in understanding how our solar system and other planetary systems like ours form. … To try and understand this puzzle, I am performing laboratory experiments to better understand atomic and molecular processes that occur on cold dust grain surfaces found in outer space,” Dominguez says.

According to Dr. Katherine A. Kantardjieff, dean of the College of Science and Mathematics at California State University at San Marcos, “Dr. Dominguez is no stranger to pushing the limits of science.”

His research utilizes a combination of physics and chemistry to investigate changes in isotope ratios in natural systems. He has explored a diverse set of phenomena, from the thermal histories of lava to the long-range transport of pollution, to the chemical composition of comets and meteorites. Additionally, Dominguez is the principal investigator of a NASA-funded, multi-million-dollar project at the University of California, San Diego, where he and his team of researchers are developing a new infrared nanoscope to study meteorite samples and explore the plasmonic properties of graphene, which may someday replace silicon in electronics.

Dr. Edward Price, an associate professor of physics at CSUSM, says, “It is clear from his CV that Gerardo is an outstanding scholar. But he’s equally committed to being an outstanding teacher and mentor. A big part of why he chose to join the faculty in the physics department at CSUSM was to work with our students, many of whom are first-generation college students or from groups that are traditionally underrepresented in physics.” Price also says that Dominguez has a genuine interest in his students, which is recognized by the students in that they clearly connect with him.

“We are really pleased to have someone of his dedication and accomplishment as a colleague,” he says.

When asked which award or accomplishment has meant the most to him, Dominguez says, “Being selected as a chancellor’s scholar at the University of California, Berkeley is probably my most cherished award. It meant that I could afford to go to a world-class university and not have to worry about how I was going to afford to go. Looking back, being accepted at Berkeley, together with the chancellor’s scholarship, was one of the best things that has ever happened to me, as it gave me access to, in my opinion, the best all-around higher education experience.”