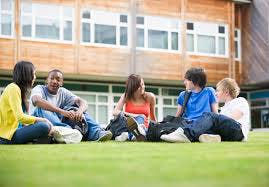 WASHINGTON — Usually when a call is made for more diversity on campus, it entails increasing the proportion of poor students and students of color at selective institutions that grant baccalaureate degrees.

But at a press conference on Thursday, a group of thought leaders called for a different type of diversity at institutions that grant associate’s degrees.

Specifically, they said more should be done to attract students from middle and upper class backgrounds to community colleges.

The idea is to end the racial and economic isolation and stratification that exists at many community colleges and thereby bring about improved outcomes in terms of graduation and other measures. That’s according to Richard D. Kahlenberg, senior fellow at The Century Foundation and executive director of the foundation’s Task Force on Preventing Community Colleges from Becoming Separate and Unequal.

“Community colleges are inadequately funded and they’re increasingly segregated by race and class,” Kahlenberg said Thursday during an event to release the foundation’s new report titled “Bridging the Higher Education Divide: Strengthening Community Colleges and Restoring the American Dream.” The report comes in the form of a 165-page book that includes a series of background papers, including one titled “The Role of Race, Income, and Funding on Student Success.”

The report notes that the dropout rates at community colleges are believed to be much higher than the overall college dropout rate of 50 percent and that few students transfer to four-year institutions despite their intentions to do so.

Two of the more useful charts are located in a chapter called “Community Colleges in Context: Exploring Financing of Two- and Four-Year Institutions,” and in some ways they show that the diversity being called for by the task force already exists.

One chart shows that the lowest two income quartiles—those who earn less than $36,149 and those who earn between that amount and $66,620, respectively—each comprise 31 percent of public two-year college students, while those in the upper quartiles comprise 23 and 15 percent, respectively.

“Honors programs are an important ‘magnet’ feature of community colleges, a way of reducing both racial and economic stratification,” the report states. “If one objective of having an honors program is to draw talented students from a range of economic and racial backgrounds, the challenge is to offer programs that simultaneously will be highly attractive to students who might not otherwise consider community college and yet at the same time avoid becoming tracking devices that segregate students within community colleges.”

“In short, we need a K–12 Title I–type program for higher education, coupled with considerations of student outcomes, such as job placements, degrees earned, and transfers to four-year institutions,” says one passage in the executive summary of the new report.

The task force cast both its calls for more funding and greater diversity at community colleges as being in the same vein as Brown v. Board of Education, which outlawed segregation in America’s public schools.

Through the 1954 Supreme Court decision, “America learned the hard way that segregation does bring inequality and reinforces inequality because that’s’ how constituency politics works in America,” said Anthony Marx, the task force’s co-chair, president of the New York Public Library and the former president of Amherst College.

“We’re concerned about that lesson not being learned at the higher education level,” Marx said.

He said community colleges serve the most challenged students but are not given the funding needed to serve those students well.

“We need to be mindful of the costs of bringing people the distance to success, that education is about value-added and funding should reflect the need for the distance traveled, particularly when kids are coming from less successful school districts in the poorest parts of our cities and towns,” Marx said. “We need more resources to help those students cover the distance so they can serve society and have the kind of mobility that we need.”

Task force co-chair Eduardo Padron, president of Miami Dade College, lamented how in Florida, community colleges get about one-fourth the funding as state universities despite offering the same kinds of courses during the first two years of college and about one-third of the funding that K-12 schools get to work with low-income students.

“When you see the funding mechanism that we have and look at the student body, you know something is very much wrong,” Padron said.

“We have long known that community colleges serve the hardest to serve students with the fewest resources, and a growing body of research has identified strategies that will significantly improve student success at these institutions,” said Bumphus. “This report lends a forceful voice to the argument that we must find the will to change the disparity between how we support different sectors of higher education or risk continued social inequity and increasing economic decline.”

In terms of finance, the new report shows that, in 2009, public two-year colleges generated $10,675 in revenue per full-time student, versus $16,648 at public four-year colleges.

Asked if they had a specific monetary target in mind with respect to what they thought community college funding should be, Kahlenberg said there is a dearth of research on the issue and that the matter needs to be explored further in the form of a study jointly done by the U.S. Department of Education and U.S. Department of Treasury.

The study would show “the extent of public subsidies to various types of institutions—and the accompanying benefit to different socioeconomic population,” according to the report.

“The intent of this transparency is not to reduce funding for four-year institutions but to detail more vividly the ways in which many community colleges deserve greater public support,” the report states.