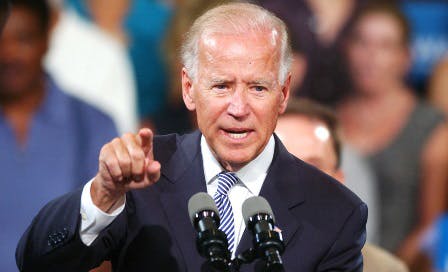 WASHINGTON—Vice President Joe Biden praised educators and said “they’re the best kept secret in America” as he announced a new plan by the Obama administration to improve graduate rates by providing student credit for job-training apprenticeships.

Biden delivered his remarks Monday at the 94th annual American Association of Community Colleges, along with his wife, Dr. Jill Biden, who has taught as a community college English instructor for many years at Northern Virginia Community College.

The Registered Apprenticeship College Consortium (RAAC) will be administered through the Departments of Labor and Education. Biden said that the consortium will help struggling students from low- and middle-class families who are forced to decide whether they should join the workforce or continue their education post high school.

“Unless we have the most skilled workforce in the world, we will not be able to lead the world,” Biden said.

While many community colleges already have “articulation agreements” with individual companies for apprentice-style training programs, the new initiative seeks to make these types of partnerships more universal and widespread across the country.

In the manufacturing sector alone, Biden said that more than 100,000 jobs go unfilled because too many Americans lack the critical skills required. That number, he predicted, would likely grow to 875,000 by 2020. The same is true for jobs in construction, technology and health care.

In his 2014 State of the Union address, President Obama tasked the vice president with spearheading the new initiative in an ambitious effort to achieve “across-the-board reform of America’s training programs to make sure they have one mission: Train Americans with the skills employers need, and match them to good jobs that need to be filled right now.”

The consortium would let students transfer credits they earn while working as apprentices to any community college, thus saving them time and money as they work toward earning an associate’s or bachelor’s degree.

“Through training at a community college … folks can transition to become welders, truckers, pipefitters, or one of the more than 100 different jobs involved in working at a natural gas site,” Biden said.

Amid challenging economic times, such a bold initiative, the vice president said, is desperately needed.

“As you all know, over the last not just 10 years before we were elected, but even back to the Clinton administration, the aperture to get into the middle class was closing rapidly,” Biden told a ballroom filled with community college presidents, faculty and other senior level administrators. “The middle class is beginning to shrink. Folks’ indication about who they were or what they thought, what they thought they could be, began to diminish itself.”

“I am thrilled there will be a renewed focus on those types of trainings and programs,” Bumphus said.