Trained as a c 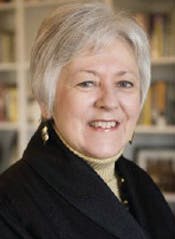 ell developmental biologist, Sally Mason became the 20th president of the University of Iowa in 2007. She also holds a full professorship in the Department of Biology in the College of Liberal Arts and Sciences. At the University of Kansas, she received awards for outstanding undergraduate advising and teaching, later becoming dean of the College of Liberal Arts and Sciences, the largest academic unit on the campus. Mason was also provost of Purdue University from 2001 to 2007.