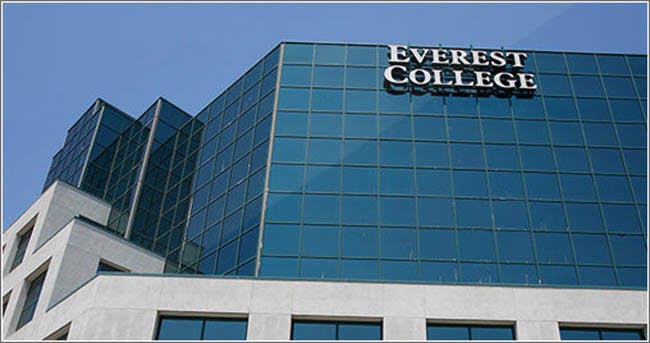 Corinthian Colleges, the Santa Ana, California-based company, plans to sell up to 85 of its branch campuses. It owns Everest College, Heald College and WyoTech schools.

WASHINGTON ― Corinthian Colleges is being sued by the federal Consumer Financial Protection Bureau for what it calls a “predatory lending scheme.”

The CFPB is seeking more than $500 million for borrowers who used the for-profit education company’s private student loans. Corinthian misled students about their job prospects, in some cases paying employers to offer temporary jobs to graduates, the agency said Tuesday.

Corinthian charged as much as $75,000 for a bachelor’s degree and pushed students into private loans with interest rates of roughly 15 percent, more than double the rate for a federal loan, the CFPB said. More than 60 percent of Corinthian students with those loans defaulted within three years.

“We believe Corinthian lured in consumers with lies about their job prospects upon graduation, sold high-cost loans to pay for that false hope, and then harassed students for overdue debts while they were still in school,” said CFPB director Richard Cordray.

Kent Jenkins, a Corinthian spokesman, disputed the claims made by the CFPB.

Jenkins said the suit is based on “isolated incidents” at Corinthian’s campuses regarding job placement. He said that the interest rate on its private loans averages 9 percent, instead of the 15 percent cited by the government. Corinthian requires that students repay the loans while attending class, having them pay an average of $35 a month.

“We ask students to make payments while in school to help them develop the discipline and practice of repaying their federal and other loan obligations,” Jenkins said.

The entire for-profit education sector has come under intense government scrutiny. The Department of Education put into place new regulations that cut off federal aid if too many students default on loans or fail to earn enough money after graduation to repay them.

Earlier this year, the Obama administration proposed even tighter regulations.

The CFPB action is the latest blow to Corinthian. The company already plans to close a dozen of its U.S. campuses under an agreement with the Education Department, which also placed Corinthian under an independent monitor, former federal prosecutor Patrick Fitzgerald.

The Santa Ana, California-based company also plans to sell up to 85 of its branch campuses. The company owns Everest College, Heald College and WyoTech schools.

As of March, 74,000 students were enrolled at the company’s campuses.