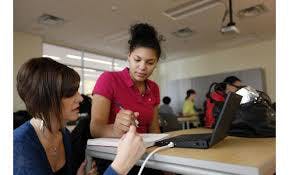 The debate continues about whether adjuncts or full-time faculty teach remedial courses, but it has not come to the foreground because of the big budget implications.Every year, thousands of adults, some high school graduates, apply to a community college. But first they have to take tests that assess their English and math skills. Nationwide, 60 percent fail at least one of the tests, according to the Community College Research Center.

Traditionally, those applicants have been required to take — and pay for — remedial or development courses to shore up their basic skills before they are allowed into college-level classes. Many never make it that far.

Such remedial education is a major contributor to lowering student retention at two-year schools. Less than 10 percent of remedial students graduate from a community college within three years, according to a 2012 report by Complete College America. It called traditional remedial education a “bridge to nowhere.”

“Frankly, the way we’ve been doing it isn’t very successful,” says J. Noah Brown, president and CEO of the Association of Community College Trustees. “Worst case, it actually discourages and creates barriers to students and can be, honestly, downright demoralizing.”

One reason is that many students arrive with higher expectations of themselves.

“Often students may not even be really aware of their own academic deficits,” Brown explains. “A lot of these students have high school diplomas, so as far as they’re concerned, they’re ready. But then they take these math and English assessments and they’re found wanting.”

With the recent national focus on increasing how many students complete academic programs at all levels of higher education, community colleges have been rethinking remedial education and trying new approaches.

“There are all kinds of new ways developmental education is being administered or presented to students across the country,” says Dr. Evelyn Waiwaiole, director of the Center for Community College Student Engagement at the University of Texas Austin.

One approach, called co-enrollment or co-requisite, scraps tradition by allowing students to enroll in a developmental math or English course at the same time they take a first-year college course in that subject. While they are catching up, those students build college credit.

Another innovation requires failing students to acquire only the particular math or English skills they lack in self-paced, modular or competency-based courses. Students can spend less than a full semester getting up to speed and skip lessons on skills they have already mastered.

A third approach abandons the insistence on algebra as the gateway math course for all community colleges. Some are allowed to take statistics, a course more closely related to an intended field of study in, for example, the social sciences.

“We’re getting some more insight into the (different) models,” Brown says. “Obviously, there’ll be a need to do a lot of follow-up study and validation, but at least anecdotally or preliminarily, there seems to be a lot of cause (for) hope.”

One of the best-known models is the Accelerated Learning Program, which the Community College of Baltimore County (CCBC) launched in 2007 after detecting that only about a third of developmental English students completed English 101 in four years.

“Almost everybody in the country knows about this (model),” Waiwaiole says.

The accelerated program has grown to include all entering students who place into the top developmental course, according to Donna McKusick, dean of developmental education and special academic programs at CCBC and the program’s director. They take that course and English 101 concurrently, with the same instructor. The developmental class has 10 students; the regular one 20, including 10 who placed into English 101.

The Advanced Learning Program, Waiwaiole notes, is limited to entering students who place in the top of the three levels of developmental English.

The Education Commission of the States observes that the model requires, as do other new approaches to remedial courses, a community college to invest in professional development for instructors.

At least 90 institutions of higher education have adapted the CCBC model, according to the commission.

Since 2011, the City Colleges of Chicago has experimented with offering co-requisite courses, which, Chancellor Cheryl L. Hyman says, “teaches the skills students need when they need to use them, rather than preparing for a college-level course in one semester and waiting until the next semester to use the skills.”

In math, colleges around the country have tried a modular approach, some with computer technology from Pearson, the educational company.

At Middlesex Community College in Massachusetts, RAMP UP Math using Pearson’s MyMathLab program has increased student retention in the first year of enrollment. Sixty percent of students in the special developmental course in the fall were still enrolled in the community college in the spring, compared to 51 percent who took the traditional catch-up course.

Another approach to math that allows some developmental students to skip algebra and instead take basic statistics has generated debate among community college leaders, Brown acknowledges. Throughout higher education, algebra has traditionally been a prerequisite. Critics have resisted abandoning that notion.

But Brown says two trademarked programs developed by the Carnegie Endowment for the Advancement of Teaching—Statway on statistics and Quantway on quantitative reasoning—have been “catching fire” at community colleges.

“I don’t think what Carnegie and some others are advocating is that we forget college algebra,” Brown says. “I think what they’re saying is we’ve put too much emphasis on college algebra, to the exclusion of other important applied mathematical concepts, like statistics.”

Brown adds: “For a lot of students, who don’t end up majoring in math or hard sciences, what they really need are these other kind(s) of mathematical skills.”

Another debate about who teaches remedial courses—adjuncts or full-time faculty—is simmering but has not come to the foreground because of the big budget implications.

Asked which type of instructors tends to teach the courses, Waiwaiole replies: “There’s a tremendous amount of adjuncts, but there are full-time faculty as well.”

Waiwaiole says her center’s report on part-time faculty disputed that full-time faculty, who spend more time on campus than adjuncts, are more engaged with students.

“We didn’t find that to be true,” Waiwaiole says. “What we really found was that part-time faculty really want to be there, and, traditionally, they’re extremely passionate about why they’re there. They’re not there for the dollars. They’re very engaged in their work.”

For his part, Brown firmly argues community college trustees should insist full-time faculty teach remedial courses—even if they do not want to do so and costs go up.

“Students who need help in developmental math or English, we need to give them our best and brightest teaching professionals, people who understand how to re-motivate and really engage students so they can master the material, get excited and move on,” Brown says. “I think it makes a huge difference.”

Brown adds, “That’s not to say adjuncts can’t be inspiring and good teachers,” but they are less engaged with a campus because they are likely to have other jobs.

At the CCBC, whose Advanced Learning Program is a national model, the remedial English courses are taught by a mix of full-time and part-time faculty, McKusick says.

Community colleges are not waiting to resolve the debate over who teaches remedial courses—they are changing how they are taught with the instructors they have available.