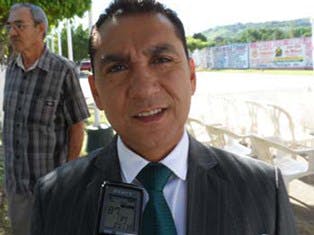 MEXICO CITY ― Federal police early Tuesday detained the former mayor of the southern Mexican city of Iguala and his wife, who are accused of ordering the Sept. 26 attacks on teachers’ college students that left six dead and 43 still missing.

Jose Luis Abarca and his wife, Maria de los Angeles Pineda, were arrested in Iztapalapa, a working-class neighborhood in eastern Mexico City, where they were hiding out in a house, according to a Federal Police official who spoke on condition of anonymity because he was not authorized to speak to the press.

They were arrested in an early morning raid carried out without a shot and then taken to the Attorney General’s Office, where they were giving statements. At least 56 other people have been arrested so far in the case, and the Iguala police chief is still a fugitive.

The couple’s detention could shed light on the disappearances, which have prompted outraged demonstrations across the country to demand the students be found.

“This was the missing piece,” Felipe de la Cruz, a parent of one of the missing, told Milenio television. “This arrest will help us find our kids. It was the government who took our kids.”

According to authorities, Abarca spent the evening of Sept. 26 dining out. He originally told the media that he ordered police to leave the students alone, that they were just passing through.

But since Abarca requested a leave of absence and fled days after the incident, authorities have identified the couple as ordering the attack. Officials have described how the couple ran Iguala like a fiefdom in cooperation with the local cartel, Guerreros Unidos. Abarca received payments of 2 million to 3 million pesos ($150,000-$220,000) every few weeks, as a bribe and to pay off his corrupt police force, according to Attorney General Jose Murillo Karam, who on Oct. 22 gave a detailed account of the couple’s alleged collusion with organized crime.

He called Pineda a major operator in the cartel, an offshoot of the Beltran Leyva gang. Two of her brothers were on former President Felipe Calderon’s most-wanted drug trafficker list until they were killed in 2009. A third brother, Salamon Pineda, was believed to run the territory in northern Guerrero state for the cartel.

Guerreros Unidos have increasingly turned to the lucrative practice of growing opium poppies and sending opium paste to be refined for heroin destined for the U.S. market, according to a federal official.

The students from a rural teachers college had gone to Iguala to canvass for donations, and authorities say Abarca ordered the attack, believing the students were aiming to disrupt a speech by Pineda, who was holding a public event that night as head of the local family services office. She aspired to succeed her husband as mayor.

Some lookouts reported the students’ arrival to town, where they had commandeered some public buses. Police, working with the Guerreros Unidos, mounted a series of attacks that killed six. With confusion of the events late Sept. 26 and early Sept. 27, it took several days to confirm that the 43 remained missing.

The search for the students has taken authorities to the hills above Iguala, where 30 bodies have been found in mass graves but none has been identified so far as any of the students. Last week, the search turned to a gully near a trash dump in the neighboring city of Cocula, but still no remains have been identified.