Reinvention Initiative Cause for Debate at City Colleges of Chicago 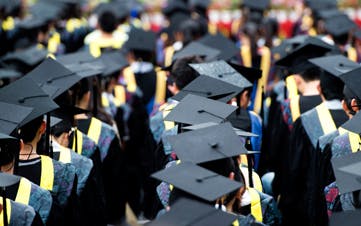 The City Colleges of Chicago (CCC) won national attention in recent years for a quick improvement of its graduation rates and a redesign of academic offerings at the system’s seven campuses.

In 2009, full-time students graduated from the college at a rate of 7 percent, according to federal data. The college says that the overall graduation rate has since increased to 17 percent.

The improvement was brought about, the college administration says, by a recalibration of the college’s academic and advising structures, in an initiative called the “Reinvention,” which was ushered in under Chancellor Cheryl Hyman in 2010.

Under the auspices of the Reinvention, campuses narrowed their course offerings, linking their focuses to specific industries. The system also created guided pathways for majors, which map out the classes that students have to take in order to graduate.

”It’s fair to say that the completion [agenda was not] a top priority at the City Colleges of Chicago prior to the current administration coming in,” said Joshua Wyner, vice president and executive director of the College Excellence Program at the Aspen Institute. “They provided a broad access to higher education, but frankly their completion rates were very low.”

The college serves a student population that is 94 percent minority, according to the Aspen Institute. Kennedy-King’s turnaround is all the more impressive in light of its location in the heart of Chicago’s Englewood neighborhood, one of the city’s poorest and most violent.

Kennedy-King’s transformation was effected as part of the broader Reinvention mission, which is redesigning individual campuses as “College to Career Centers.” Each center, or campus, now serves as the “headquarters” for a specific industry. At Kennedy-King, for example, the focus is now culinary arts and hospitality.

“Since the end of World War II, we’ve been dramatically expanding access to college. By and large we’ve done that by expanding the number of programs and courses that are offered. And while that has led to a great number of choices for students, the reality is that it’s a dizzying array of choices,” Wyner said, later adding, “The notion of trying to consolidate programs in ways that ensure that the programs of study that exist have real value makes some sense.”

CCC faculty, however, take issue with the way the Reinvention initiative has unfolded. Earlier this month, the Faculty Council announced a vote of no confidence in Chancellor Hyman. Faculty leaders say that there is an inherent conflict between the college’s original mission of providing broad access to Chicagoans across the city and the administration’s current methods of consolidation and improving graduation numbers. In the meantime, the educational futures of Chicago’s most vulnerable citizens are at risk, faculty say.

“We do not want to have a vote of no confidence. We would very much enjoy feeling trust and feeling like our leadership is steering our ship in the right direction for our students and our communities,” said Jennifer Alexander, Faculty Council president and early childhood development instructor at Richard J. Daley College. “We do not take this decision lightly, and we only sincerely hope that this is a moment where we can now move forward and right this ship.”

Faculty say that centering academic programs in the College to Career Centers, as opposed to distributing them throughout the city, will block some part-time students from pursuing their degrees. Adding longer travel times to the daily commutes of students who already have to juggle child care or a job may push some to drop out, faculty say.

“To say that all of the full-time faculty should be under one roof is akin to saying that all Whole Foods should be on the Northside, and everybody should [have to travel] to Whole Foods to get organic fruits and vegetables,” said Jennifer Asimow, associate professor of child development at Harold Washington College. “It’s creating educational deserts.”

Wyner defended the consolidation model, saying that it would be onerous for every campus in a system to provide some of the more intensive programming, like health care or advanced manufacturing. “The notion of trying to create efficiencies by assigning particular programs to particular campuses makes sense,” he said.

CCC district director of communications Katheryn Hayes echoed a similar sentiment. “The College to Careers model allows us to concentrate talent, partner relationships and capital investments, offering our students a high-quality educational experience at an unprecedented value to taxpayers,” she said in an email.

“Bringing our programs in high-demand fields under one roof represents a unique opportunity for all our students, faculty and staff to be associated with best-in-class programs,” Hayes added. “Students in these programs benefit from learning from all of CCC’s faculty in the respective domain and from one another.”

Faculty members expressed concern regarding the college’s new tuition rates, which the board of trustees approved in July in an effort to raise revenue without increasing property taxes. Under the new, three-tier “flat fee” payment structure, the price hike hits part-time students hardest. A single three-credit class now costs $599, as opposed to the old price of $267. Similarly, a pair of three-credit classes now costs $1,069, up from $534. By contrast, full-time students, who take 12 credits or more, pay $1,753.

At the time that the tuition hike was announced, Hyman said that the price structure was designed to incentivize more students to attend full-time, according to the Chicago Tribune. Commonly accepted wisdom holds that students who attend school full-time have a better chance of graduating.

The new model signals to some faculty that the college’s mission has shifted from providing access to all Chicagoans to a more “linear” or “traditional” type of student who might have just graduated from high school and who has family support while pursuing a degree.

“[CCC] is nothing like the place it was 15 years ago when I got hired,” Asimow said. “When I got hired, our mission was so clear … we knew we were about providing access and providing an extraordinarily good educational experience for very little money for people from all over. It’s just not anything like that anymore.”

Hayes said that the faculty voice has a place in the Reinvention process. “More than 100 faculty, staff and students work on designing and implementing the reforms under Reinvention,” she wrote. “Faculty were given sabbaticals to work on our reforms.”