Dr. G. Duncan Harris didn’t always know that he wanted to work at a community college. But as a youngster, he grew up on college campuses.

Harris, who is the interim campus chief executive officer at Capital Community College (CCC) located in Hartford, Connecticut, considers himself a “second-generation” community college educator, as his father worked at several community colleges throughout his childhood.

Harris’ father was also dean of Trenton State College School of Education and a deputy director in the Connecticut Technical College System in the 1980s.

A Hartford-area native, Harris has worked in the Connecticut Community College system for more than 22 years, 12 of which has been at the management level.

Prior to being selected as Capital interim campus CEO in 2018, a position that is similar to an institutional president, Harris worked in different positions at Manchester Community College, most recently as chief student affairs officer. 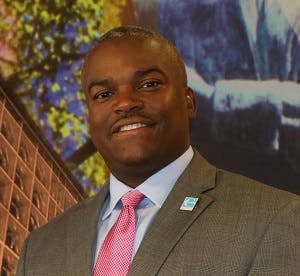 It’s been an exciting six months at Capital, Harris says, noting the many improvements the community college has made since his arrival.

“We’ve reengineered our enrollment model and how we bring students in, positioning them to be successful,” he says. “I certainly value the role that advisers play in student retention, so we’ve created an actual advising department that they didn’t have previously.”

Currently, Harris and Capital administrators are working on outreach efforts and determining how they can more fully leverage the Hartford philanthropic community in support of CCC students.

“We’re working with a consultant to help us build capacity with our foundation and [have also] brought on some new foundation board members,” Harris says.

A lot is happening in Hartford right now, Harris says.

For instance, several companies are relocating to the city, such as Infosys, a global consulting and technology company that recently opened a Technology and Innovation Hub with the goal of creating 1,000 jobs by 2022.

Capital is currently working with the company to establish new student opportunities and faculty development programs.

Capital also has a program called the Hartford Heritage Project, where they partner with the local arts community to provide students and faculty with activities that community organizations such as the Hartford Symphony conduct in the liberal arts curriculum.

Outside of the community college space, Harris is affiliated with several state and national organizations, currently serving on the National Council on Black American Affairs board (and is a former president of the council), the New England Board of Higher Education and on the boards of local organizations FoodShare, Windsor Federal Savings Bank, Community Health Resources and the BSL Education Foundation.

According to Harris, Capital Community College’s student body consists of 38 percent African-American students and 30 percent Hispanic students, something that Harris says the college is using to its advantage.

This summer, CCC will launch a summer bridge program for 15 aspiring Black and Latino teachers where they would start at the community college and then transfer to Eastern or Central Connecticut State University after completing their associate’s degree.

The students would have a mentor or a coach provided to them by the program and “then we would connect them with employment along the way to make sure that they get to and through the teaching requirements,” he says.

Harris has received several awards and honors throughout his higher education career for his leadership and contributions to the community, including the Connecticut Higher Education Community Service Special Award.

“I think community college is where it’s at right now,” said Harris. “I think that we’re a great equalizer. I love working here. I’ve certainly had other opportunities to work at four-year institutions and I haven’t even thought about it because I love the work that I do. It’s rewarding and fulfilling.”

“The work is so meaningful and noble … we’re not selective admissions institutions, we accept the top 99 percent of all high school graduating classes. There’s something exciting about that,” he says.

This article first appeared in the February 21, 2019 edition of Diverse.