Dr. Leah Barrett always saw herself as someone who was going to lead an organization.

She credits her undergraduate mentors at the University of Wyoming (UW) for directing her down the career pathway of higher education. 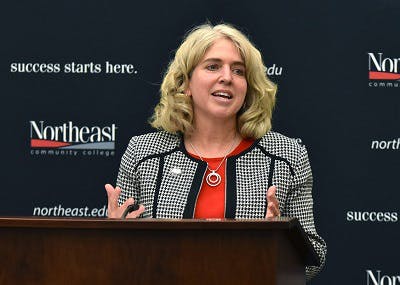 Higher education allows Barrett to combine her love of business management and financial systems alongside her passion of providing support to college students in order to help them reach their dreams.

Barrett found her calling in the world of community colleges, despite working at four-year institutions for most of her career.

“It’s just a wonderful fit for my strengths and my passion for helping students to achieve their dreams,” says Barrett, who was recently named president of Northeast Community College in Norfolk, Nebraska. She takes the reins at Northeast in January.

Her career started at UW, where she worked as a program advisor of student activities. After three years, Barrett transitioned to Arizona State University and then Valparaiso University where she served as an assistant director within the student union.

Her first experience with a community college came in 2016 after she became vice president for student affairs at the Northern Wyoming Community College District.

“It really opened my eyes to the diversity of students that we work with in reference to post-traditional students, students coming out of high school looking to save money before they transfer to a four-year institution and people who are there to earn their certificate so they can get a better job that is going to improve the life of their family,” says Barrett. “It’s been an incredible experience.”

In terms of working at a two-year institution versus a four-year institution, Barrett has found the leadership and management aspects relatively similar. However, the biggest difference is the length of time students attend the institutions.

“At a four-year institution, many of your students are there for four years,” she says. “So, you have additional time with them to set the stage and to help influence their success. Whereas at a two-year school, sometimes you only have nine months, if they are working on a certificate program, to create intervention and opportunities for them to be successful and to earn their degree.”

In October, Barrett was named president of Northeast Community College, becoming the first female to do so in the school’s history. She will begin her new role in January.

Often, being the “first” in a position or role causes many people to have preconceived expectations, says Barrett.

“You just need to make sure that you are open to recognizing that people have expectations that are often times unwritten,” she says. “And what is important for you to do is really to help write the narrative of your success and your leadership.”

Being from Wyoming, Barrett said leading an institution situated in a rural area is a great fit for her and her family.

“It’s really a fantastic institution,” she says. “There are some wonderful things going on there in reference to the relationships with the community and with the state of Nebraska. It’s an exciting time for me personally and I look forward to really bringing all that excellence that’s there in northeast Nebraska together as a partner in that continued building of that rural vitality of the area.”

Barrett said that the most rewarding aspect of her job is seeing students reach their goals and find success in the ways that they define it.

“That’s often a first-generation college student just making it through their first semester or someone that has to step out and come back,” she says. “What is so exciting about what we do is helping people reach their dreams and their goals.”

Additionally, she says working at a community college is about providing opportunities to the community as well as to students, regardless of their age, experiences or current career.

“It’s just an incredible opportunity to provide leadership to that work with that vision of the student first and being a student-ready institution,” she says. “I feel like I’ve had experiences all over the United States in multiple areas of this work and I’m ready. I’m ready to be able to be the person that works with the team that creates that vision.”