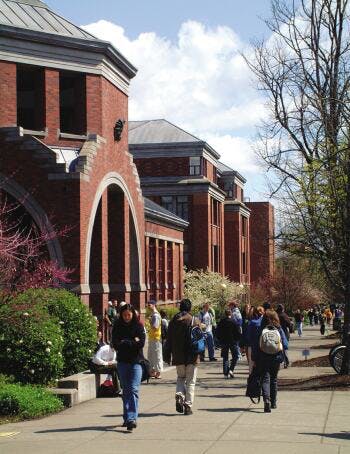 PORTLAND Ore. — Oregonians went back to school in large numbers during the Great Recession, leading to a record for graduates in 2011-2012 from the state’s public universities.

Schools are also doing a better job helping students get the credits they need to graduate, officials said, and dramatic numbers of community college students are making the transition to four-year schools and getting degrees.

The result was 20,209 graduates last school year from the seven universities, The Oregonian (http://bit.ly/W3nrs2) reported Wednesday.

State officials said it’s a sign the state could realize at least one element of its ambitious 2025 educational attainment goals.

“It’s great news, and it certainly helps demonstrate that we are getting on the right trajectory,” said Ben Cannon, education adviser to Gov. John Kitzhaber.

Graduates this year were the first to get the “Western promise” that locked in tuition at the same rate for four years. Not only did that make it affordable to stay in college, but also it gave students a huge incentive to finish before higher tuition kicked in, Associate Provost David McDonald said.

Portland State University saw the number of bachelor’s degrees was up 10 percent.

Two terms before graduation, officials checked transcripts of arts and sciences students and planned courses to make sure they would earn a diploma. They contacted hundreds to encourage them to remake their schedules.

As many as 300 who would not have graduated on schedule did so and got their degrees, said Robert Mercer, an assistant dean.

“It’s exciting but also a little daunting to realize we need to do this kind of outreach systematically for all students, and how are we going to do that?” he said. “But we are thrilled to see the increase in the number of graduates. There is no way to look at that and not see it as a positive.”

Information from: The Oregonian, http://www.oregonlive.com