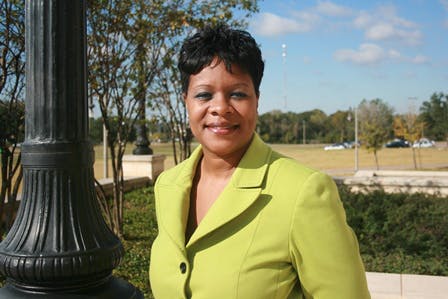 Felicia Nave says through hard work and perseverance, an excellent work ethic, a strong faith, family support and a positive attitude, one can accomplish and realize significant achievements that have the potential to impact the world.

When it comes to the number of women of color in the U.S. pursuing degrees and entering careers in STEM fields, the statistics point to a dearth. But don’t include Felicia McInnis Nave in the national norm. Her status as a chemical engineering professor at the HBCU Prairie View A&M University ranks her among a class of fewer than 12 African-American women in the nation who serve as faculty in this field. In addition, she’s also an administrator, serving as Prairie View’s associate provost and associate vice president for academic affairs.

Nave has been bucking the trends since she was a child, with the support of family, teachers and, later, professors at HBCU Alcorn State University, who encouraged her scientific pursuits as an undergraduate.

“From K-12 through [college], I never encountered the stereotypical challenges and obstacles,” Nave recalls.  “I never felt like it’s something I couldn’t do.”

That inclusive, supportive environment Nave experienced at Alcorn State was not the case at the University of Toledo, the predominantly White institution where Nave pursued her graduate studies. As the only African-American female in the doctoral program, she had to learn and function in an environment that she remembers as being “not necessarily friendly,” from how professors would grade her tests to fellow students who didn’t want to work with her on team assignments.

Determined to succeed, Nave says she “learned how to deal with my peers and professors in a way that made them feel comfortable, because I knew their discomfort could potentially derail what I was there for.” Relying on her faith and a network of family and friends also saw her through difficult times.

Nave notes such challenging and negative graduate school experiences can deter African-Americans from pursuing careers in academia, instead opting for lucrative ones in industry. “They may have not had good experiences while they were pursuing their Ph.D., so the academy may be the last place they want to come back to.”

Nave believes the onus is on professors like her to paint a positive portrait of a career working behind the ivy-covered walls. She also believes identifying and mentoring future professors as undergrads is necessary.

In addition, Nave views her work on a team headed by Rutger’s Dr. Fred A. Bonner II—with the aid of grants through the National Science Foundation’s (NSF) ADVANCE program—as crucial to beefing up the ranks. The goal of the NSF ADVANCE program is to increase the representation and advancement of women in academic science and engineering careers, thereby contributing to the development of a more diverse science and engineering workforce. Since 2001, the NSF has invested more than $130 million to support ADVANCE projects institutions of higher education and STEM-related not-for-profit organizations across the country.

“Dr. Nave has been an advocate for women in STEM through the wildly popular Women in STEM ADVANCE conference she has hosted for the past three years,” says Bonner, Samuel DeWitt Proctor Chair in Education and professor at Rutgers. “She is also a model for young scholars of color enrolled in HBCUs as she is a consistent advocate of the ‘power of HBCUs.’”

While Nave believes she has yet to experience the proudest moment in her career, seeing students whom she thought would not make it march across the stage at commencement or successfully land in STEM careers comes close.

“I grew up in a household of educators,” says the wife and mother of four. “I enjoy having the opportunity to make a difference in the life of so many. Education is a great equalizer.”