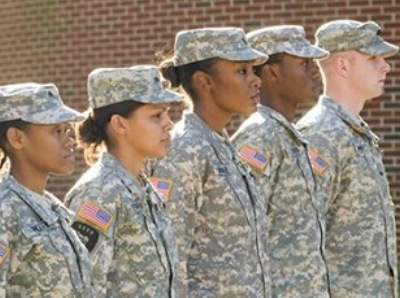 Defense Secretary Ashton Carter recently emphasized the importance of diversity in the military, saying, “ … We must start from a position of inclusivity, not exclusivity. Anything less is not just wrong — it’s bad defense policy, and it puts our future strength at risk.

“ … It takes decades to grow our senior military leaders, and today, we can’t afford to close ourselves off to anyone,” Carter continued in a June Pentagon speech. “As we remind ourselves how diversity and inclusion help make us stronger, we must also remember another reason why they’re important: because they’re part of our national character.”

In 2012, Rep. Hank Johnson, D-Ga., whose congressional district sits only miles from the Atlanta University Center — home of five of the state’s 10 historically Black colleges and universities — spoke of the importance of diversity in military leadership as the FY 2013 National Defense Authorization Act was being reauthorized.

“It’s important that our military leadership reflects America,” said Johnson at the time. “Minorities are underrepresented among officers and senior enlisted personnel. We need more diverse representation in the military’s senior leadership.”

A March 2011 report by the Military Leadership Diversity Commission declared “the Armed Forces have not yet succeeded in developing a continuing stream of leaders who are as demographically diverse as the Nation they serve. Racial/ethnic minorities and women still lag behind non-Hispanic white men in terms of representative percentage of military leadership positions held.”

Despite some gains over the previous 10 years, a 2013 Department of Defense (DoD) report found that only 9.4 percent of active duty officers across all branches of the military are Black, compared to 17 percent of enlisted members. In fact, all racial/ethnic minorities are grossly underrepresented among the officer ranks; Whites comprise 77.6 percent of all officers in the U.S. military.

“The officer corps is innately an exclusive club,” says Navy Lt. Rabb Muhammad, assistant operations officer for the Navy Recruiting District Atlanta. “Most officers come from a strong family military tradition. Some have had family in the military that can be traced to the birth of the Republic. … Minorities have only been able to serve in the capacity of being an officer since the 1940s. Minorities are starting extremely late to the race.”

Not only that, he says, “[In order] to be selected for training as an officer, access to quality secondary and higher education is essential to passing the various officer accession entrance exams and the interviews required to obtain a nomination. African-Americans, Latino Americans and other ethnic groups historically have not had equal footing when it comes to quality educational opportunities.”

That is where historically Black colleges and universities (HBCUs) come in. Reserve Officers’ Training Corps (ROTC) is an officer training program housed on college campuses across the country, including more than 20 HBCUs. If the DoD is to increase diversity among the officer ranks, it will be the programs at these institutions that will help fill the gaps, say experts.

But campus ROTC programs do more than just serve as a pipeline to fill a diversity void for the military; they benefit the institutions and students, too.

“Most ROTC units are based out of universities and colleges that have a large student body,” Muhammad says. “The value of [small HBCUs] having their own ROTC units, independent from a larger university, is to give them the ability to draw federal dollars to their school in the form of tuition.

“What the schools have to do as part of the bargain is not only provide facilities for the ROTC unit to operate, but help the ROTC unit actively recruit qualified students into the program so the [armed forces] can award those students scholarships and, by effect, help fund the school,” he continues.

But Muhammad notes that not all of these institutions fully recognize the value the program adds to the campus.

“Just dealing with the two HBCUs I have personal and professional experience with, the administrations at Morehouse and Spelman need to fully buy into the program,” he says.

Partially because of a negative attitude about the U.S. military, Muhammad says that some HBCUs are missing out on opportunities to better serve students by directing them to ROTC or Officer Candidate School programs.

“The students at HBCUs are very hungry for the opportunities the military has to offer, but either have zero clue how to get in contact with an officer recruiter or are told by their peers or professors that the military is a waste of their time,” he says.

“A successful ROTC program is made by a combination of strong local recruitment, an open and effective line of communication between the school’s administration and the ROTC unit’s permanent staff, and the wholesale buy-in of the school administration. Ideally, what would happen is if a student comes to their class adviser and says, ‘I don’t have the money for school but you can see my GPA is decent’ or ‘I’m really interested in opportunities to work for the government/military’ they would direct them to us. That is not happening at all.”

Muhammad says that this is a huge missed opportunity to direct federal dollars directly to the institutions. Because the DoD is acutely aware of the need to diversify the officer ranks, there are HBCU-specific ROTC scholarships available, he notes.

“The federal government literally allots millions to NROTC [Naval Reserve Officers Training Corps] scholarships for students specifically at HBCUs. Tuskegee is a great example of a way forward,” Muhammad says. “They have the largest independent HBCU NROTC unit, numbering in the hundreds. Each student comes with fully paid tuition. If you do the math, that’s millions of dollars in the pocket of Tuskegee and millions of dollars left on the table for Morehouse and Spelman.”

Air Force Capt. Edward “Dewey” McRae says that, if not for his ROTC scholarship, he would not have been able to afford an education at Morehouse College.

“Deciding to do ROTC in college was one of the best decisions that I could’ve made. It afforded me a free education that I would have not otherwise received,” he says. “Being an ROTC student taught me about responsibility and time management early on from the day I showed up on campus. Mixing a full course load of 15 to 18 [credit] hours, along with ROTC requirements, usually an additional four [credit hours] a semester, and [physical training] twice a week wasn’t easy.

“ROTC wasn’t for everyone,” McRae adds, noting that, although his freshman class included 30 ROTC students, only five made it through the program as commissioned officers by the end of senior year.

McRae, who says he enjoyed an active non-ROTC social life while on campus, including pledging a fraternity and participating in other campus activities, notes his ROTC affiliation increased his sense of responsibility.

“Regardless of everything I was doing … everyone knew [on] Tuesdays and Thursdays I was the guy walking around campus in a military uniform who wanted to fly planes one day,” he says. “I didn’t just represent myself, but the uniform as well, and my actions had to reflect this.”

Autumn A. Arnett can be reached at aarnett@diverseeducation.com.