WASHINGTON — Arguing that President Donald J. Trump has emboldened white supremacists to “walk in public without hoods,” Derrick Johnson — interim president of the NAACP — said the civil rights organization he leads is as relevant today as it when it began to fight lynchings over a century ago.

“When we look at today’s reality, we’ve been here before. It’s nothing new,” Johnson said in remarks Tuesday at National Press Club. 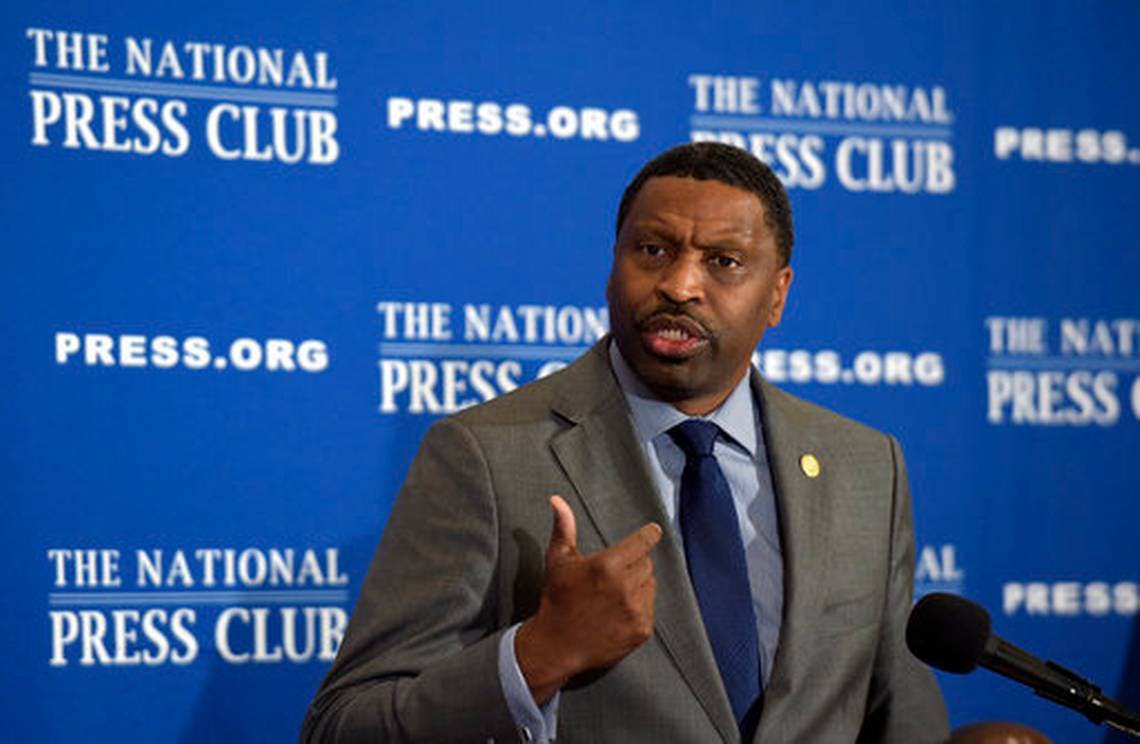 Derrick Johnson is the interim president of the NAACP.

“Looking at this current administration, we have a long way to go. But that’s why we must continue to have an NAACP,” said Johnson, an adjunct faculty member at Tougaloo College, where he teaches a course in politics each fall. “Advocacy for social justice to ensure equal protection under the law is paramount in this time,” Johnson said.

In a speech that touched on topics ranging from voter suppression to Confederate statues, an overarching theme of Johnson’s talk was the importance of voting to ensure resources are equitably distributed.

“In our democracy, if our currency is our vote, we should celebrate everyone having that one dollar called the vote that they can exercise,” Johnson said.

Just as those without money cannot make purchases at a store, those who pool their dollars — in this case votes — can “purchase the whole store,” Johnson said.

He hailed recent victories against racial gerrymandering in North Carolina and Texas, broached the idea of compulsory voting, and questioned the current voting process as being too restrictive.

“Is it outrageous to say restrictive voting policies should no longer be in place?” Johnson asked, questioning why voters can only vote at local polling places during certain hours of one day. “Why should we allow the most sacred part of democracy to only take place during a 12-hour window on a Tuesday when most people work?” Johnson said.

Johnson also touched on current events, from the aftermath of Hurricane Harvey — he said the NAACP plans to meet later this week to make sure federal resources “don’t skip communities” — to the recent tragic killing at a White nationalist rally in Charlottesville, Va.

Johnson predicted that there will be more incidents like Charlottesville because the Trump administration “created an atmosphere that allowed domestic terrorists to exist.”

Johnson said the NAACP has no interest in meeting with the Trump administration unless the meeting is about substantive outcomes and not just a “photo-op.” Johnson was presenting a thinly veiled critique of a meeting that Trump had earlier this year with HBCU leaders.

Asked what he would consider to be a substantive outcome, Johnson had numerous answers. Several focused on law enforcement, such as the need to continue consent decrees in communities where law enforcement agencies have been “bad actors.” Or not lifting restrictions like the one that President Barack Obama placed on law enforcement to use military surplus gear equipment from the Department of Defense over concerns about how the gear was used in the Ferguson protests of 2015. An executive order that President Trump signed earlier this week lifted that restriction. The administration has said Trump’s action will boost public safety.

Addressing the controversy over Confederate statues — a focal point of the Charlottesville rally — Johnson said such statues should not be financed with public money or put on display in public places because they pay homage to treason.

“Symbols that recognize treason should not represent a governmental entity. Period,” Johnson said. “If there are those who want to recognize and celebrate that, I’d look to relocate [the statues] in a museum or a cemetery. I prefer a cemetery.”

Johnson revealed plans that the NAACP has to talk with textbook publishers regarding the Civil War.

“It was an act of treason,” Johnson said, lamenting that too often the Confederacy’s treason is “whitewashed.”

Invoking the famous quote by W.E.B. DuBois that “the problem of the twentieth century is the problem of the color line,” Johnson said: “We’re still dealing with the question of race, because we won’t let go of a past that is based on revisionist history.”