Kavanaugh Confirmed, Sworn In and Dems Vow to Fight

Judge Brett Kavanaugh was sworn in as the 114th justice of the U.S. Supreme Court on Saturday, bringing an end to one of the most contentious confirmation hearings in recent memory. 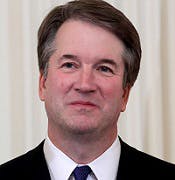 Kavanaugh took his oath of office in a quiet private ceremony after the Senate voted 50-48 to confirm him to the high court.

Democrats are already promising to use the Kavanaugh confirmation as an issue in the upcoming  midterm elections.