WVSU to Honor Earl Lloyd with Naming of a Street

West Virginia State University (WVSU) has announced it will recognize alumni and Naismith Basketball Hall of Fame member Earl Lloyd by naming a street on campus after him during a ceremony to be held on Friday, Nov. 9 at 2 p.m. Lloyd passed away on Feb. 26, 2015. 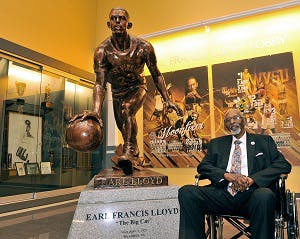 Earl Lloyd with his statue in WVSU’s convention center

The ceremony will be located in the lobby of the D. Stephen and Diane H. Walker Convocation Center, where a statue of Lloyd resides. The new street will be named Earl Lloyd Way and will be located between the center and WVSU’s tennis courts.