The College of the Holy Cross has awarded an honorary degree to well-known litigation attorney and alumnus Theodore V. Wells Jr. at the beginning of a three-day commemoration of the 50th anniversary of the Black Student Union at Holy Cross. 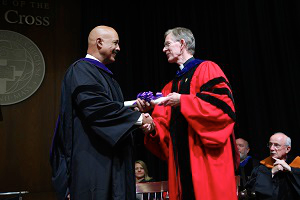 Wells was one of the college’s first Black students when he started in 1968 and has since become a leading criminal defense attorney.The honorary Doctor of Law degree bestowed to Wells recognizes his service to the college, his legal career, and work efforts in racial and social justice, educational equality and advocating of civil rights, according to college officials.

Wells has spent the last five decades practicing law, most recently working as a partner in the Paul, Weiss, Rifkind, Wharton & Garrison New York law firm in addition to volunteering with non-profits that are focused on civil rights and racial justice.