First African-American Woman in the U.S. Coast Guard Dies at 103

Olivia Hooker, the first African-American woman in the U.S. Coast Guard and one of the last survivors of the 1921 Tulsa Race Riots, has died at the age of 103. 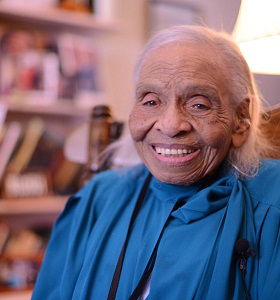 Hooker was only 6 years old when the Tulsa Race Riots (also called “Black Wall Street”) occurred, almost completely destroying a Tulsa neighborhood. Hooker hid under a table while a mob destroyed her family’s home, she said in an interview with National Public Radio earlier this year.

Hooker joined the United States Coast Guard during World War II as a member of the Semper Paratus program (SPAR), where she conducted discharges for guardsmen coming home from the war and continuing their civilian lives, according to the Huffington Post.

Hooker received a master’s degree from Columbia University and a Ph.D. in psychology from the University of Rochester. She was also a professor at Fordham University. In addition, Hooker also worked with the Tulsa Race Riot Commission, currently the Tulsa Race Massacre Commission, which assisted and provided services for those affected by the violence and their survivors.