Jacob Anderson, a  former fraternity president at Baylor University who was accused of rape, has been banned from the University of Texas at Dallas (UT Dallas). where he is currently a student. 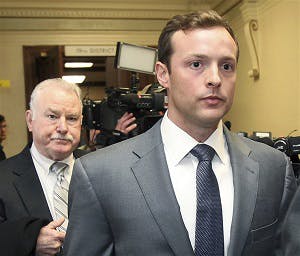 On Wednesday, university president Dr. Richard Benson published a statement on Twitter stating that Anderson is not allowed on campus as a student or guest. In addition, he will not be admitted to the UT Dallas graduate school, but will still receive his undergraduate degree.

Earlier this week, Anderson, 24, accepted a plea deal of no contest to a charge of unlawful restraint. In 2016, Anderson, who was president of Baylor’s Phi Delta Theta fraternity at the time, allegedly led a 19-year-old woman behind a house where he sexually assaulted her until she was unconscious, according to USA Today.

Benson’s statement follows a student-led petition to remove Anderson from the campus, with more than 26,000 signatures. The petition argues that “students at UT Dallas have a right to feel safe on their campus.”

Anderson’s accuser filed a suit against him, five of his fraternity brothers, the fraternity and the owner of the house where the assault allegedly took place, USA Today reported. Anderson was sentenced to three years of probation, a $400 fine, a requirement to attend counseling, but will not be required to go to jail or register as a sex offender.