Monica Levitan
Mar 13, 2019
Dr. Rebecca Stoltzfus, president of Goshen College, has joined 15 other Indiana higher education leaders in signing a letter requesting stronger language in Indiana hate crimes legislation that was previously “gutted”  that would “enhance penalties against criminals” who hurt others “based on their disability, race, religion sex, sexual orientation or gender identity.”

“Passing SB 12 as it stands today — without explicitly listing specific classes — will bring more harm to our state and further perpetuate the negative perception of Indiana,” the letter stated. “It will push out more of our students and detract more talent from coming in.” 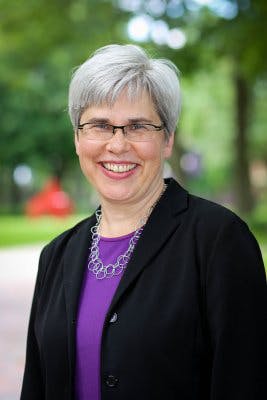 Indiana is one of five states that does not have a law of that type, and Indiana Governor Eric Holcomb has previously announced his support for state legislatures to pass hate crimes legislation, according to a Goshen release.

“The years a student spends in college are vitally important,” Stoltzfus said. “Young people from this community, the state, the nation and the world come to our campus to live and learn, and to understand more about how to live in an increasingly complex and diverse world. It is my responsibility to make certain that each student feels welcomed, wanted and able to do their best work. Our very future depends upon this effort.”