William Vickery, who died Feb. 4, has given Amherst College a $25-million gift, with about $22 million of the amount designated for use by the Emily Dickinson Museum. 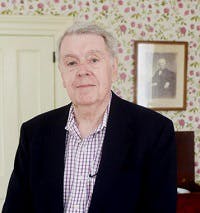 It’s the largest donation the museum, which was founded in 2003, has ever received and will be known as the William McCall Vickery ’57 Emily Dickinson Fund. The money is earmarked for maintenance and improvement of collections, buildings and grounds.

After retiring in 1987 as vice chair of the company’s board and chair of DFS International, Vickery returned to Amherst, holding positions in advancement and as assistant treasurer until retiring in 2008. Over the years, he gave to more than 26 funds at the college.

Vickery “truly cherished the Emily Dickinson Museum,” museum executive director Jane Wald said in a statement. “He was acutely aware of the importance and possibility of restoring Emily Dickinson’s Homestead, her brother’s house, The Evergreens, and the historic gardens and grounds. He was at the lead in every undertaking for the museum’s improvement, and his quiet enthusiasm was infectious and never deterred. His transformative gift will enable the museum to become the true center of celebration of Emily Dickinson’s life and work.”

Part of his gift will be used to create the William McCall Vickery ’57 Piano Fund for restoring, rebuilding, repairing and purchasing pianos for the music department. In 2007, in honor of his 50th reunion, Vickery endowed The William McCall Vickery 1957 Professorship to honor a senior faculty member who is dedicated to and distinguished by teaching and research of musicology or art history.