Starship Technologies launched a new service earlier this year to deliver food and groceries at two U.S. universities using self-driving robots. Now the San Francisco-based startup is planning on doing a whole lot more, according to an article in CNET. 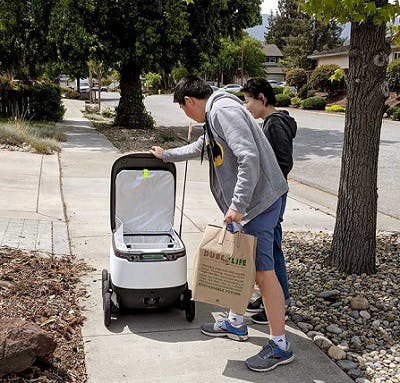 Starship announced Tuesday that it will expand the service to 100 universities over the next two years, thanks to $40 million in new funding. The expansion, which will focus mostly on the U.S., starts with the University of Pittsburgh this week, Purdue University in early September, George Mason University in January and Northern Arizona University in March.

Starship is a part of the burgeoning delivery robots industry, which already has attracted corporate giants UPS, Amazon and Google, as well as smaller players such as Postmates and Workhorse.

These companies see an opportunity to bring their customers things they need much faster, more cheaply or with far more convenience than current delivery options offer. And they could extend delivery times to nearly every hour of the day. However, these companies will need to develop their services amid growing concerns about bots and automation stealing humans’ jobs.

Amazon is busy working on flying drones to deliver consumer goods to customers in 15 minutes through its Prime Air program and has already started a pilot in Britain. It’s also developed the Scout autonomous sidewalk robots, which look like and work similarly to Starship’s bots, and is testing these deliveries in Washington state.

Meanwhile, UPS is focusing on helping business customers, including efforts to bring flying drones to hospital campuses to speed the completion of lab tests.

While those features make it hard for human delivery workers, they’re no concern for Starship’s autonomous bots, which are preloaded with detailed 3D maps of campuses and don’t need to park anywhere. They bring breakfast, late-night snacks and plenty else in between, letting students buy food from local restaurants through its app. The bots then bring orders to wherever customers are on campus for $1.99 per shipment. Starship also gets paid by the restaurant for making each delivery.

Starship typically uses 25 to 50 robots per campus, and they roam around seven days a week, rain or shine, from 8 a.m. to 2 a.m. Bayer said they don’t displace workers’ jobs, since deliveries often don’t exist on campuses, and the company hires student workers to maintain, monitor and recharge the bots.

Bayer added that the 50-pound bots are safe on sidewalks, driving at 4 mph and equipped with 10 cameras, radar, ultrasound sensors and GPS, in addition to sophisticated computer vision and neural networks to process what they see.

Theft of the bots doesn’t happen, since they include alarms and are monitored by humans, Bayer said, adding that the payload of food remains locked inside until a student opens it using the app.