After Back and Forth, Jerry Falwell, Jr. Agrees to Resign as President of Liberty U

Jerry Falwell, Jr. has officially resigned — once and for all — as president of Liberty University, with the university’s Board of Trustees and Board of Directors accepting the resignation in a meeting this morning. His resignation is effective immediately.

Falwell, the pro-Trump leader of the evangelical school his late father founded, initially agreed to resign as its president and from its board of directors yesterday before abruptly reversing course after seeing media reports of his resignation.

Then, late last night, Falwell had his attorney send his resignation letter to members of the Board’s Executive Committee, according to a Liberty press release on Tuesday. The committee voted to accept all the resignations immediately this morning and recommended ratification to the full board. His severance compensation was determined by his pre-existing employment agreement with no new adjustments. 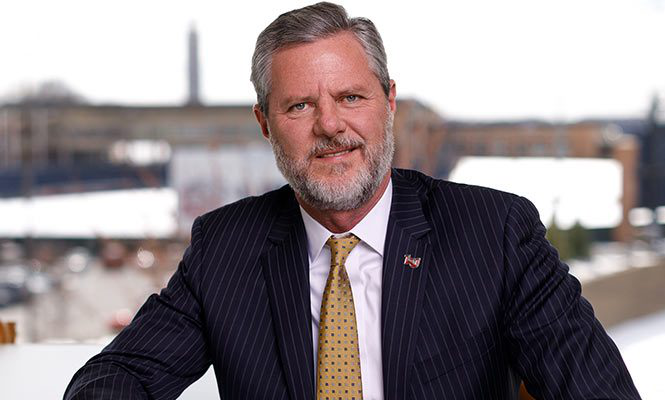 The school initially asked Falwell to take an indefinite leave of absence on Aug. 7 following a controversial social media post. After which, “additional matters came to light that made it clear that it would not be in the best interest of the University for him to return from leave and serve as President,” stated the university Monday. Earlier that day, a breaking news story alleged that Falwell and his wife Becki, had a sexual relationship with a business associate.

“During his time as president, Falwell Jr. oversaw more than $1 billion of ongoing or planned construction as the campus was almost entirely transformed with new world-class academic buildings and athletics facilities,” states the press release. “He worked with university leadership to achieve record enrollment in residential and online programs, which now stands at over 100,000 students. The university’s heartfelt prayers are with him and his family as he steps away from his life’s work.”

This article has been updated with additional information.