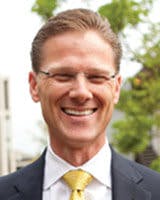 Martin has been president of the university for nine years, during which he’s helped the school triple its endowment.

In an email statement to the university community, Martin said he has accepted a leadership role at a national health system, and that the “nature of the role and the healthcare system’s expectations … will require me to transition prior to the conclusion of the academic year,” The Seattle Times reported.

Martin also cited personal reasons, especially the deaths of his father and sister and wanting to move closer to his family in the Midwest.

José Flores, president of the Associated Students of Seattle Pacific, SPU’s student government body, said that Martin’s news would mean moving the attention of the Board of Trustees’ away from discussions about a SPU sexuality and sexual orientation policy to searching for an interim president.

“This might result in the board looking for an interim president, rather than looking at the students and members of the LGBTQ+ community that have really pushed for this change,” Flores said. “… The university is at a crossroads right now, and the students unfortunately are at the middle of all this.”

Dr. Laura Hartley, the provost, has been named executive-in-charge until the board appoints an interim president.