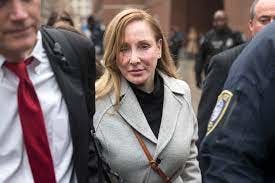 Palatella, 66, will admit to paying $500,000 in bribes to secure her son's acceptance to the University of Southern California in 2018 as an athletic recruit with fake credentials.

Her deal includes a six-week prison sentence, $250,000 fine, and 500 hours of community services as well as two years of supervised release, according to the New York Daily News.

A sentencing hearing has not yet been scheduled, and a federal judge will determine Palatella's punishment.