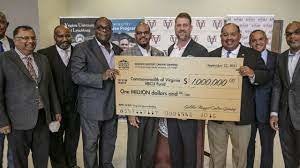 GNOG also said that it will share 4% of its net gaming revenue with the HBCUs, including an annual minimum shared donation of $500,000, according to local reports.