Rice University’s provost, Dr. Reginald DesRoches, will become the eighth president of the private Houston institution. Notably, he will be the first immigrant and first Black man to serve in the role. He succeeds Rice’s current president, Dr. David Leebron, who plans to step down in July.

“When President Leebron told us he was stepping down, we knew we wanted to build upon what he has accomplished these last 18 years,” said Robert Ladd, chairman of the Board of Trustees. “We embarked on a search for a proven leader who will be transformational, who will lead Rice to even greater stature and national recognition. We have found a leader who is inspirational and universally respected, a leader who is visionary, strategic and kind. We are proud to welcome Reginald DesRoches as our university’s next president.” 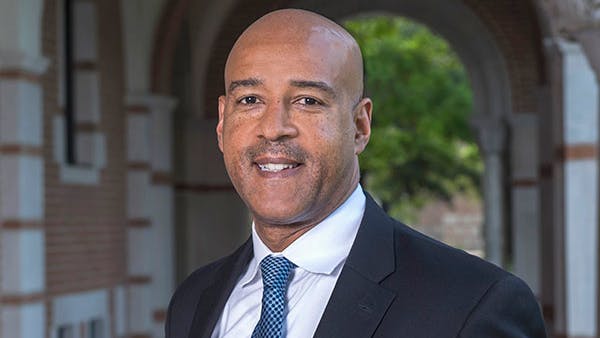 DesRoches is an internationally recognized structural engineer and earthquake resilience expert, who has testified before committees of the U.S. House and Senate and has authored over 300 technical publications. In addition to his duties at Rice, he currently chairs the U.S. Department of Commerce National Institute of Standards and Technology National Construction Safety Team, which is overseeing the investigation into the collapse of the Champlain Towers South Condominium in Surfside, Florida.

As provost, DesRoches “dramatically increased” the university’s research awards, launched several new centers and institutes and initiated partnerships with organizations throughout the Houston area, according to university officials. He also established the Office of Diversity, Equity and Inclusion and is leading the first major expansion of the undergraduate student body in over a decade, says the university.

“Reggie DesRoches is an outstanding choice as Rice’s next president,” Leebron said. “I have had the privilege of working closely with Reggie over the last 4½ years, first in his capacity of dean of engineering and then as provost, and observed firsthand his extraordinary leadership, values, thoughtfulness and ambition for Rice. I am confident he will fully achieve the aspirations of our ‘Be Bold’ campaign, and take Rice to new heights of achievement and impact.”

Born in Port-au-Prince, Haiti, DesRoches was raised in the New York City borough of Queens. He holds a master’s degree and Ph.D. in structural engineering from the University of California, Berkeley. His research and teaching have earned him to numerous awards, including the Distinguished Arnold Kerr Lecturer Award, earned in 2019; the John A. Blume Distinguished Lecturer Award; earned in 2018; the 2018 Earthquake Engineering Research Institute Distinguished Lecturer Award; the 2015 American Society of Civil Engineers (ASCE) Charles Martin Duke Lifeline Earthquake Engineering award; the 2007 ASCE Walter L. Huber Civil Engineering Research Prize; and the Georgia Tech ANAK Award.