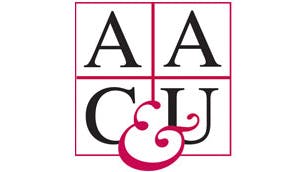 Placing "American" before "association" rather than "colleges and universities" is intended to recognize the growing involvement of educators around the world and position the organization for continued growth in global membership, says the AAC&U.

“The association’s new name acknowledges the reality that AAC&U has become a global membership organization,” said Dr. Lenore Rodicio, senior fellow in the Aspen Institute College Excellence Program and chair of the AAC&U Board of Directors. “While AAC&U members continue to represent the full institutional diversity that is the great strength of US higher education, it is simply no longer the case that our membership is limited to American colleges and universities only.”