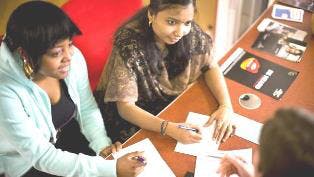 NACAC
The field of college admissions suffers from a lack of diversity that could ultimately undermine its ability to reach and serve America’s increasingly diverse college students.

That is one of the key implications of “Career Paths for Admissions Officers,” a survey released recently by the National Association for College Admission Counseling, or NACAC.

The survey found that non-Whites are underrepresented at all points on the admission career trajectory, “and the issue only becomes more pronounced at higher levels.”

“Diversity matters differently to different students,” said Jim Rawlins, director of admissions at the University of Oregon and a past president of NACAC. “But especially in regards to encouraging students from underserved backgrounds to pursue higher education, a deep experience within our profession is that students can often be most inspired by counselors and other role models who have experienced the same challenges.”

“That might play into how a college does everything from write its instructions or essay prompts to what gets valued or examined in the review process about a borderline applicant,” Rawlins said. “Even at a college where grades [and] scores might be used to make the vast majority of decisions, there will always be some admissions decisions that are the hardest, and require much more deliberation and context.”

The NACAC survey also found that demographic shifts in college students is placing more pressure on admissions officers to deliver results that generate money for the institutions where they work. Rawlins identified these shifts as fewer high school graduations overall and an increasing number of students from diverse backgrounds — as found in a Western Interstate Commission for Higher Education, or WICHE, report, titled “Knocking at the College Door.”

As a result of the pressure college admissions offices feel to help keep their institutions in good financial health, many in turn worry that this pressure will give rise to a “sales” culture in college recruitment, the survey found.

“The worst thing about this sales approach creeping in would be for colleges to put their needs for sustained enrollment [and] tuition income ahead of the need for students to come to the school that best fits their needs and goals,” Rawlins said.

The NACAC finding of the threat of a sales culture in college recruitment comes at a time of growing debate over whether institutions of higher learning should see themselves as businesses and their students as “customers.”

For instance, at a recent Enrollment Planners Conference conducted by ACT, one speaker suggested that admissions officers should embrace a series of “dirty words” that include “sales,” “customer” and “competition.”

Rawlins said the language is “largely bad, but also has some good realism behind it.”

“More to the point, I would call language like this ‘incomplete,’ and therefore oversimplified,” Rawlins said, noting that students admitted to colleges are being admitted to “an opportunity, not handed a product.”

At the same time, Rawlins said, some colleges resist the idea of students as customers to such an extreme that they become “dismissive, arrogant and detached, rather than seeing their obligation and opportunity as including the need to root for their students’ success at all times.”

“With every school experiencing this differently, introducing small elements of customer service and sales mentalities into their approach may be just the thing for some campuses, and help both their goals and their students’ success,” Rawlins said.

“Institutions that are pursuing anything resembling a ‘get rich quick’ approach to trying rapid changes in recruitment strategy might actually find that using a sales approach is much like a quick sugar high, bringing in short-term improvements that are only successful in the short term, and actually can be counterproductive in the long term,” he said.