Gordon F. May Prepares to Retire from BCCC After Facing Tough Challenges

When Dr. Gordon F. May started his tenure as president of Baltimore City Community College in 2014, the institution was in rocky shape. Its accrediting agency had placed the institution on warning, threatening the loss of federal funding if accreditation was ultimately revoked. 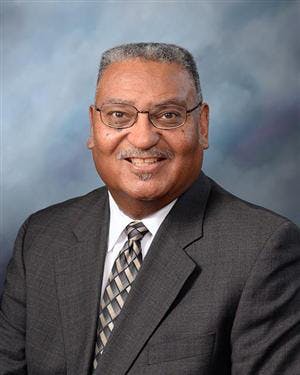 Dr. Gordon May is stepping down as president of Baltimore City Community College at the end of the 2017-2018 academic year.

“It was a dark cloud,” May said in an interview with Diverse. “Even though we were still fully accredited, just that warning status had a terrible impact on us.”

Student enrollment declined from over 7,000 in 2010 to 4,409 in 2016. Approximately 95 percent of incoming students require at least one remedial course, more than any other Maryland community college.

“We meet students where they are and take them where they want to be,” May said.

Early this month, May announced that he would step down when his term expires in August 2018. Prior to joining BCCC, he spent 15 years in private industry and 27 years at Oakland Community College in Michigan in various leadership capacities, including leading two of the system’s campuses as president.

After he retires, he said that plans to rejoin his family in Michigan.

Dr. Rosemary Gillett-Karam, BCCC board vice chair, described May’s leadership style as “consultative” in a phone interview, noting that he inherited a substantial issue from the get-go in the form of the warning status from Middle States.

“Because he had such an outstanding team who got to work immediately, we were blessed,” Gillett-Karam said. “We were able to achieve reaccreditation.”

Gillett-Karam is associate professor of higher education at the historically Black Morgan State University in Baltimore and has served on the BCCC board for the past six years, serving one term as chair and two terms as vice chair.

Leadership at BCCC has been characterized by a high rate of turnover. Since 2002, BCCC has had five presidents. During that same period, the institution was placed on warning twice and put on probation once by Middle States. Graduation rates continue to hover at about 4 percent.

To address BCCC’s challenges, the Maryland General Assembly passed legislation this May pushing the college to adopt reforms or face the loss of state funding. BCCC is a state agency, the only community college of this type in the state of Maryland. All others are run by counties. The college receives approximately $40 million from the state for fiscal year 2018, accounting for 62 percent of the college’s unrestricted revenue.

“This is a unique college, there are not many like it in the United States,” said Gillet-Karam. “Or even in Maryland.”

Although BCCC is the only community college in Baltimore, it became disconnected from the city it is designed to serve after it became a state agency in 1990, according to Dr. Ann Cotten, director of the Schaefer Center for Public Policy at the University of Baltimore.

Cotten authored a report on the college published in September 2016, which later formed the basis for legislation subsequently implemented by state lawmakers.

“Because it’s a state agency, unlike other community colleges in the state, it lacks the formal structures and incentive systems that normally align community colleges with local executives and the economic development of the jurisdictions that they’re in,” Cotten said.

One mandated reform included the restructuring of the board of trustees, replacing all but two members of the former board. The board, known as the Realignment Board of Trustees, is now led by University of Baltimore president Kurt L. Schmoke, the former mayor of Baltimore and former dean of the Howard University School of Law.

Still, May has high hopes for the college’s prospects.

“The Baltimore City Community College new Realignment Board of Trustees, my executive leadership team and I are positioning the college for greatness,” he said, adding that the college has several important workforce oriented programs, in nursing, biotechnology and others.

For example, the school is the only community college in Maryland that offers an associate’s degree in robotics.

“We can’t graduate enough of those students because Amazon offers a position to every one of them,” May said.

As an urban institution, BCCC was designed to serve community members and help meet local business needs. Community stakeholders are making moves to reestablish and strengthen connections with the institution.

In August, the Mayor’s office in Baltimore proposed including funding in next year’s budget for free tuition to Baltimore City Public School graduates who wish to attend BCCC. Only 245 Baltimore high school graduates matriculated to BCCC in 2016, and the college hopes to increase that number going forward. The average student age at BCCC is 30.

Coppin State University, a historically Black institution located blocks away from the BCCC campus, announced in August that it would offer free tuition to any BPS graduates who has graduated from BCCC with an associate’s degree. The offer will be available to students starting in fall 2018. According to school officials, the plan is designed to broaden access to an affordable education to Baltimore residents.

Dr. Maria Thompson, president of Coppin State, said in an email, that May’s tenure at BCCC has been fruitful, adding, “Gordon May has served Baltimore City and West Baltimore very well, and during a particularly critical time.”